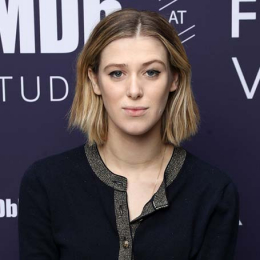 Honor Swinton Byrne is a Hollywood actress better known for working in films like The Souvenir, I Am Love. Honor is a star kid and she caught the limelight even before coming out to the world as her mother Tilda Swinton is a famous British actress.

Personal Life of Honor Swinton Byrne; Is she Dating Someone?

Honor Swinton Byrne is possibly single as of know. The well-known star kid is private about her personal life and prefers to keep information about her early life and dating life within herself. Moreover, she is less spotted in the media and is never seen with any men in the public.

Byrne shows a clean sheet when it comes to her personal and professional life. She is never rumored for her relationships and has never been a part of the media controversies. Additionally, she seems focused on her career as an actress.

What is the Net Worth of Honor Swinton Byrne?

Swinton started her acting career by working in the 2009 film named I Am Love. Since then, she appeared in the number of films including The Souvenir(2019). Further, she is currently working in the sequel of the film Souvenir named The Souvenir: Part II.

Honor's mother is a well-established actress in the Hollywood industry who holds an estimated net worth of $10 million. More to that, her mother is an award-winning actress who is famous for working in blockbuster films like; Michael Clayton, The War Zone, Adaption, Young Adam, and mostly The Chronicles of Narnia series.

Additionally, she worked in the 2019 blockbuster movie which is currently premiering around the globe and until now it has garnered over $1.029 billion on the box office against the budget of $356 million.