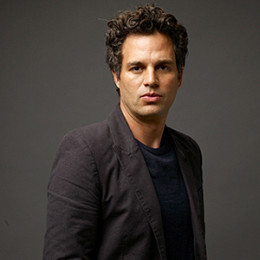 Mark Ruffalo is a 50-year-old American actor, filmmaker, and social activist. He is best known for portraying the character of Hulk in Marvel's Avengers franchise. In 2010, he won a nomination for Academy Award for his role in the drama 'The Kids Are All Right.' Ruffalo lives in Manhattan with his wife, Sunrise Coigney and three children, a son and two daughters.

Mark Ruffalo was born Mark Alan Ruffalo on November 22, 1967, in  Kenosha, Wisconsin to Marie Rose, a hairdresser, and stylish, and Frank Lawrence Ruffalo, Jr., a construction painter. He was raised along with his three siblings; two sisters, Tania and Nicole, and a brother, Scott (died 2008) in Virginia Beach, Virginia.

He is American and belongs to the mixed ethnicity as his father is of Italian descent and mother is half-French-Canadian.

Ruffalo graduated from First Colonial High School in Virginia Beach, and later he and his family moved to Los Angeles where he attended the Stella Adler Conservatory and co-founded the Orpheus Theatre Company.

Mark Ruffalo started his acting career through theater. During his initial phase, he worked on movies and TV series The Dentist (1996), Safe Men (1998) and Ride with the Devil (1999) playing minor roles.

Later, he met Kenneth Lonergan and acted in several of his plays which opened the Hollywood door for him. In 2006, he played in Clifford Odets' play ‘Awake and Sing!’ at Belasco Theatre for which he won his first Tony Award nomination.

Ruffalo made his directorial debut with Sympathy for Delicious which released in 2009. His movie premiered at the Sundance Film Festival and also won the Special Jury Award.

In 2009, Ruffalo won the Sundance Film Festival Special Jury Prize for Sympathy for Delicious. He earned his first Academy Award nomination and BAFTA nomination for Best Supporting Actor for The Kids Are All Right (2010).

In 2013, he was awarded MTV Movie Award for Best Fight, for The Avengers. His TV series, The Normal Heart won him the first Primetime Emmy Award for Outstanding Television Movie (co-executive producer).

Mark Ruffalo is a happily married man. He lives in Manhattan with his wife, Sunrise Coigney and three children; son Keen (born in 2001), and daughters Bella Noche (born on 2005) and Odette (born on 2007).

The couple exchanged vows in June 2000 at an intimate ceremony in the presence of their closed ones.

In 2002, Ruffalo was diagnosed with a benign brain tumor (more specifically, an acoustic neuroma) but later went through surgery due to which he faced partial facial paralysis. However, he recovered from the paralysis, but he became deaf in his left ear as a side effect of the tumor.

Ruffalo is known as an anti-fracking activist in the state of New York. He supports the group ‘Water Defence’ which undertakes clean water programs and founded the  ‘Solutions Project’ which works towards achieving 100% renewable energy.

Mark Ruffalo estimated net worth is $20 million, as per some online sources. He is active in the industry since the 1990s, and till now he is very active.

In 2015, he got paid around $2.9 million for his role as Bruce Banner in Avengers: Age of Ultron. However, his co-star Robert Downey Jr made $40 million. According to Net Worth Tomb, Ruffalo received $3.4 million for his appearance in Spotlight, but the movie was a flop with a domestic collection of only $45 million.

His 2010 movie, Shutter Island was a huge success with $294 collection at box office. Likewise, Now You See Me grossed an impressive $351 million worldwide. In 2009, he sold his  Los Angeles' Hollywood Hills house for $1650000 and moved to Callicoon, New York.

Recently, he again sold his next Brooklyn Home for $3.2 million. Ruffalo owns a BMW i3 which cost more than $50,000. Besides this, he owns many luxurious properties and cars.

Sunrise Coigney is popularly known as the wife of the actor, Mark Ruffalo. She lives with her husband and children in Manhattan.

Keen Ruffalo is the first child of Mark and Sunrise. He was born in 2001 and lives with his parents.

Bella Noche is the first daughter of Mark Ruffalo. she has one elder brother and one younger sister.

Bella Noche is the youngest daughter of Mark Ruffalo. She has one elder brother and one elder sister.