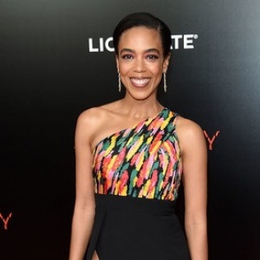 An American actres Jazmyn Simon is better known for her role in the television series Ballers. Likewise, her other notable movie roles are in Ed and Baggage Claim. In 2018, Simon appeared in the thriller movie Acrimony.

Engagement With The Love Of Her Life

Jazmyn Simon met her future husband Dulé Hill on the set of Ballers and shortly began dating. Her spouse Hill is an American actor popular for his role in NBC drama television series The West Wing. The couple engaged on 14th April 2017, which they together announced via Instagram. Hill had planned to propose the love of his life in a unique way. 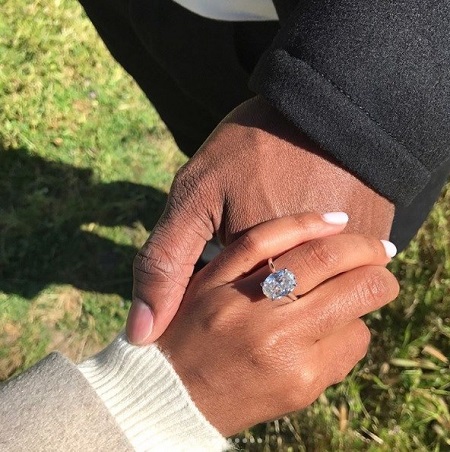 As per Hill's plan, he was about to propose Simon on a hot air balloon ride but it did not go as per the plan due to windy weather condition. However, as soon as they landed, Hill got down on one knee in front of the balloon and popped up a question to Simon with a beautiful engagement ring on his hand in Ojai, California. 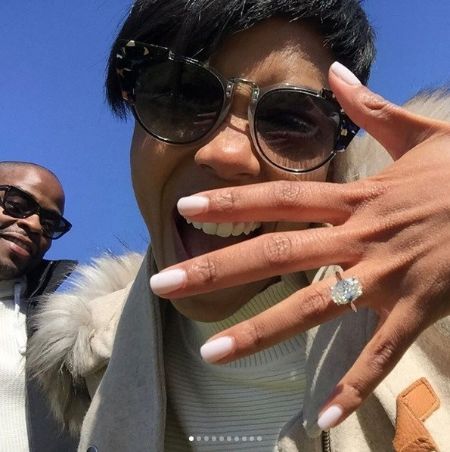 Simon accepted the proposal. She shared a picture of a beautiful oval-cut diamond ring on Instagram showing off the engagement ring and captioned it as “#ISaidYes.” Furthermore, Hill also shared the same picture on his Instagram with a beautiful caption as "Step by step, hand in hand, you & me, lock & key."

Ballers cast Jazmyn Simon and her fiance Dulé Hill exchanged the vows on 21st April 2018, just after a year of their engagement. Their co-stars James Roday, Richard Schiff, and Allison Janney were present at the wedding. 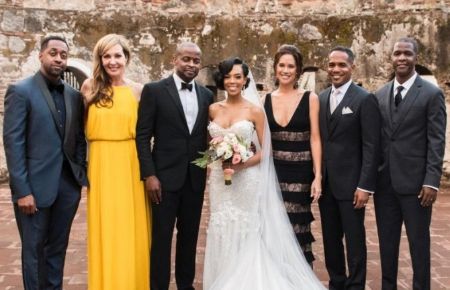 Similarly, the actress further celebrated the bridal shower before a month of their wedding on 27th March 2019. The lavish ceremony took place at The Garland situated in North Hollywood, California.

As per their plan, Simon and Hill's wedding took place at a stunning 18th-century church in Garden of the Capuchinas in Antigua, Guatemala. Regarding the selection of their wedding venue, Simon said she found out about the beautiful ruins in Antigua by fate. 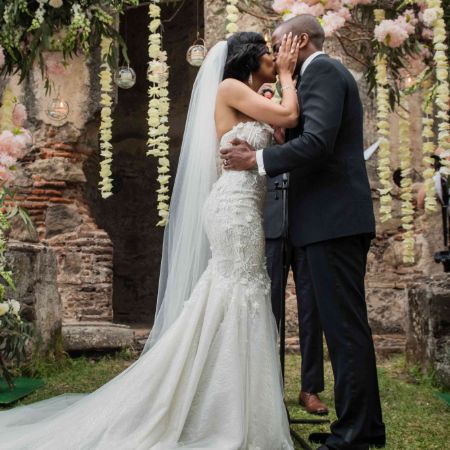 Jazmyn Simon and her spouse Dulé Hill on their wedding SOURCE: People

“The Capuchinas was built in 1736 and suffered two massive earthquakes … but after 243 years, the building is still standing. I thought, what better physical representation of the love Dulé and I have for one another, that no matter how many storms come, how the world will shake, our love will stand the test of time. When I explained that to Dulé, he said, ‘Let’s do it.'”

In an interview, Simon said that she hit the jackpot in love. She further added that she is looking forward to waking up every day to see the smile of her hubby as his smile can light up the whole world. 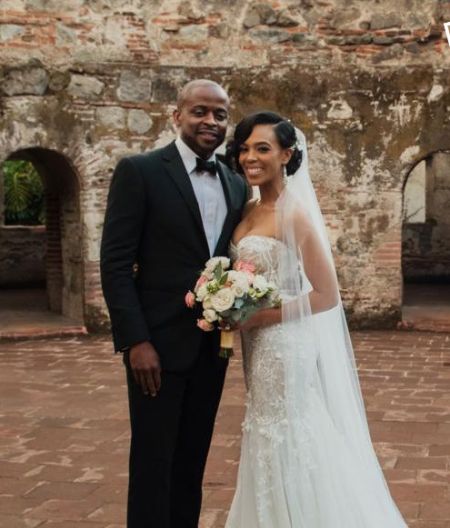 The couple sent the invitation letter to each guest to join their wedding ceremony. Furthermore, along with the letter, they also sent a note mentioning the details of the church’s history. They explained the church hasn't fallen down even after several devastating earthquakes.

The bride walked down the aisle wearing a stunning white beaded gown designed by BERTA. Moreover, her beauty was further enhanced by Charlotte Olympia heels and Maria Elena jewelry. On the other hand, Hill wore a Ralph Lauren tux with a black bowtie.

Pregnancy And The Birth Of First Child

Less than a year of their wedding, Jazmyn Simon and her husband Hill announced that they were expecting their first child. On Thursday, 4th January 2019, Hill gave a huge surprise to his fans about his wife's pregnancy. 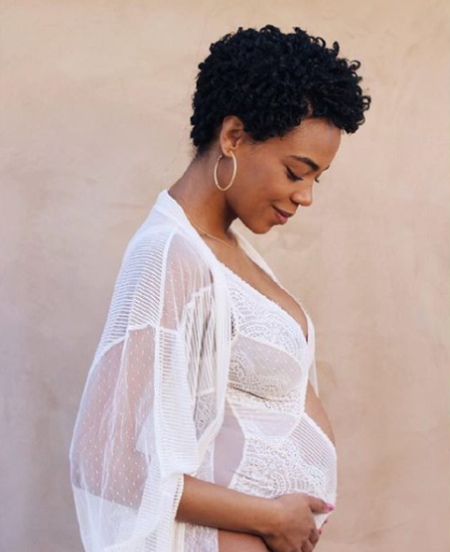 Hill took Instagram to share the happy news. He shared a beautiful picture showing off the baby bump and captioned the picture as;

"Soooo, we’ve been keeping a secret... The Littlest Hill is coming soon #ItsABoy"

Likewise, Hill revealed via Twitter that their baby will arrive in May.

Finally, on Friday, 10th May 2019, the couple welcomed their adorable son Levi Dulé Hill. They confirmed the news by sharing a beautiful snap to People. 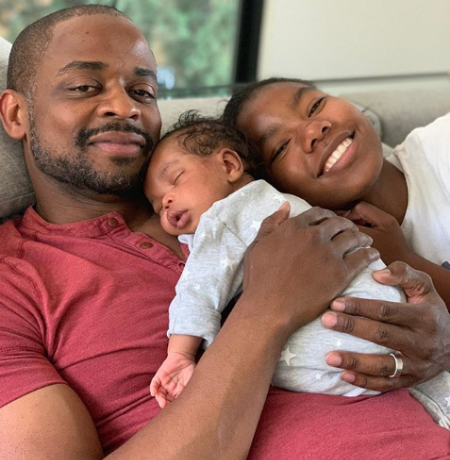 As of now, the husband and wife are living a blissful life taking good care of their newly born child. Both of them often shares adorable pictures of their kid on their respective social accounts.

The 38 years old Acrimony cast, Jazmyn Simon was married to another man prior to her marriage with Hill. However, Simon has kept the identity of her former spouse a secret. Furthermore, the details of her previous wedding is also a mystery. 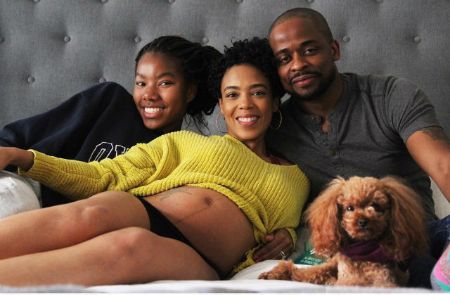 Nevertheless, with her former husband, she has a daugther Kennedy born on 28th August 2004. Simon and her daughter have a good bond. Just like the details of their wedding, the information about their divorce is also unknown.

In the same way, her hubby Hill is also married twice. He was formerly married to a Canadian television actress Nicole Lyn. The former couple exchanged the vows on 10th July 2004, but they divorced just after two years in 2012.

Jazmyn Simon, Ballers star has a net worth of $1.5 million.

Ballers cast Jazmyn Simon was first married to a guy whose identity is still unknown. She also has a child with her former husband.

Jazmyn Simon married her Ballers co-cast, boyfriend Dulé Hill after a year of their engagement on 21st April 2018.

Kennedy is the daughter of an American actress Jazmyn Simon.

Levi Dulé Hill is the son of Jazmyn Simon and Dulé Hill born on 10th May 2019.