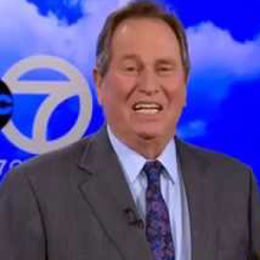 Jerry Taft is one of the most recognized television personalities in Chicago. He is the former chief meteorologist for ABC's WLS-Channel 7. He retired on January 19, 2018. He has forecasted Chicago weather for 42 years becoming one of the station's longstanding and high-profile on-air news talents. He is a veteran of the United States Air Force. Taft is a married man and a proud father of his two children.

Jerry Taft was born on 14th March 1943 in the United States of America under the birth sign Pisces. Taft is American as per nationality, and as far as his ethnicity is concerned, he is White.

Taft attended the University of Wisconsin, Madison where he earned Bachelor of Science degree in meteorology.

Taft served as a pilot for 15 years in the United States Air Force and then a forecaster before beginning his career in broadcasting. He worked as a classroom teacher for aviation and flight planning and as an instructor pilot in the T-38 aircraft.

Jerry Taft began his professional journalism career in 1976. He worked as a weather weekend weatherman at the NBC affiliate, KMOL-TV (now WOAI-TV), in San Antonio, Texas. He worked for the network until 1977.

Taft debuted his career in television as a meteorologist at the WMAQ-TV (NBC owned-and-operated TV station) in Chicago. He worked there for almost seven years. Also, he was the principal meteorologist on WMAQ-AM radio. Later, he joined WLS-AM.

Here's a video sampling of his best moment at WLS-TV; a retirement tribute:

On 19th January 2018, Taft retired from weather reporting after working 42 years on Chicago Television and 34 years on WLS-Channel 7. He bid goodbye to all of his colleagues and the network in a heartfelt note.

After retirement, the ABC7's former Chief meteorologist Taft launched a new career as an Uber driver in February 2018.

First day as Uber driver. Not full day. Love not having a boss. pic.twitter.com/DmrRdH1kHe

He posted on Twitter that he made $85 in five hours and loves not being a boss.

Jerry Taft is a married man and has two children. Taft married to Shana Taft in a cozy ceremony in the presence of a limited number of guests. The couple has two children together, a son and a daughter.

Taft's daughter is a 2017 graduate. She graduated from the Loyola University Chicago in May 2017. He announced her daughter's graduation via social media.

Taft is a family man and loves to spend time with his family. He currently resides with his wife and children in his house in Lemont, Illinois. His niece, Evelyn Taft is a weather reporter on CBS 2, Los Angeles.

Jerry Taft's Net Worth and Salary

Jerry Taft, a high-profile meteorologist, has an estimated net worth of $1.5 million. His annual salary was $300,000, but Taft started off with two broadcasts making just $25 per show.

Taft has a Lemont house worth $1.6 million. He and his wife bought the house in 2005. The house is located in the Ruffled Feathers Golf Club community.

The house has 6½ baths, three fireplaces, crown molding, a two-story foyer, a kitchen with granite countertops, a master suite with a sitting area, a finished walkout lower level with a custom bar, and recreation and gaming areas.

The outside of the house nearly covers half-acre property with an expansive deck and patio and views of a pond. The couple currently listed the house for $1.495 million.

Jerry Taft is a married man. He tied the knot to Shana Taft. The couple is together after years of relationship.