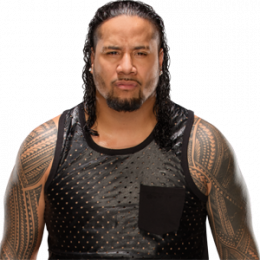 Jimmy Uso was born Jonathan Solofa Fatu on 22nd August 1985 in San Francisco, California under the birth sign Leo. Uso is American as per nationality, and as far as his ethnicity goes, he is of Polynesian ethnic group. His parents, Rikshi and Talisua Fuavai-Fatu raised him with siblings- Jey Uso (twin brother), Joseph Fatu, Thavana Monalisa Fatu and Jeremiah Peniata Fatu.

Some of the famous wrestlers, The Rock and Roman Reigns are his cousins. He is also a member of Anoi’s family and Tonga Kid. Uso studied at Escambia High School where he used to play football.

Later, he graduated from the University of West Alabama where he played as a linebacker. Uso being a son of a professional wrestler, trained right from his childhood to become a wrestler.

Jimmy Uso debuted in wrestling in 2007 from World Xtreme Wrestling. In 2009, Uso took part in Florida Championship Wrestling (FCW) with his brother, where they became FCW Florida Tag Team Champions defeating The Dudebusters. Ever since the victory,  the brother formed a team The Usos (means brother in the Samoan language) and competed together.

In 2010, The Usos entered Raw and debuted as heels attacking Unified WWE Tag Team Champions of the time David Hart Smith, Tyson Kidd, together known as The Hart Dynasty. A year later, they were drafted to the SmackDown as a part of the 2011 Supplemental Draft.

From 2013, the Uso brothers began to use face paint similar to their uncle, Eddie Fatu known by the ring name Umaga. They were also involved in the traditional Survivor Series with wrestlers, Ray Mysterio, Cody Rhodes and Goldust. But unfortunately, they were eliminated from the survivor series.

Jimmy Uso, the famous wrestler, is currently a married man. Uso tied the knot with his longtime girlfriend, Trinity McCary aka Noami. She is also a professional wrestler like her husband. Noami is a model, dancer, and an actress as well.

On 16th January 2014, the couple exchanged their vows in the presence of limited guests including families, close friends, and relatives in Hawaii. Both were emotional and literally in tears during their wedding.

Once married to Uso, Naomi became the stepmother to Jayla Fatu and Jaiden Fatu. The children are from Uso's previous relationship. The wrestler hasn't made the mother of the kids public. Uso and Naomi do not have any children together.

In 2011, Uso was arrested for driving under the influence in Florida. He was driving in the wrong way of the street due to which he took a Breathalyzer test. Uso was then found to have some signs of impairment for which he was charged $500 for a bail.

In 2013, it was rumored that he was charged for the second time for the similar case. However, this time it was just a misunderstanding.

As per some sources, Uso earns an annual salary of $255k from his profession. Whereas, his wife has an estimated net worth of $50k. Uso owns a Subaru that costs $30776.

On 16th January 2014, Jimmy Uso married his longtime girlfriend, Noami aka Trinity McCary. She is also a wrestler like her husband. Noami has two stepchildren from Uso's previous relationship.