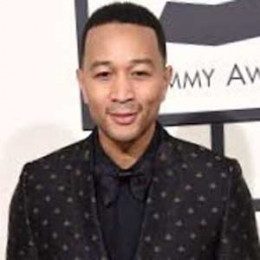 John Legend is an American singer, songwriter, musician and actor born on December 28, 1978. He was born John Rodger Stephens in Springfield, Ohio. Legend was one of the four children from his working parents, father Ronald Lamar Stephens, a factory worker and mother Phyllis Elaine, a seamstress.

As a child prodigy, Legend showed an interest in music from an early age. He sang gospel and played piano at the age of seven. He learned to play piano from his grandmother.

Legend graduated from the University of Pennsylvania majoring in English. He directed a cappella group named Counterparts while in college.

Despite the keen interest in the musical field, Legend worked at management consulting job with Boston Consulting Group for three years. However, he often used to perform at night clubs in New York City.

He began his musical career with his debut album Get Lifted in 2004. The album ranked at no seven on the Billboard 200.  His single All Of Me earned a Billboard Hot 100, number-one single in 2013. Since then Legend has won ten Grammy Awards, one Golden Globe Award, and one Academy Award till date.

Altogether he has released four albums including Love in the Future (2013). He worked in collaboration with the already established artist like Kanye West, Mariah Carey, Rick Ross and so on, in several albums. He played piano on “Everything Is Everything” by Lauryn Hill.

Legend’s recently released album Darkness and Light (December 2, 2016) featuring his single Love Me Now. As of 2017, he performed a duet with Ariana Grande on the title track for the film Beauty and the Beast.

Besides his professional work, Legend is also an active philanthropist. He has shown a keen interest in charitable and social events and participated in the majority of humanitarian projects in Asia and Africa.

The 39-year-old musician, Legend is happily married to the supermodel Chrissy Teigen. They tied the knot on September 2013, in Italy.

John and Chrissydated for four years and engaged in 2011 while they were on vacation in the Maldives. The husband and wife were blessed with their first child Luna Simone on April 2016.

The couple moreover welcomed their second child and only son Miles Theodore Stephens. He was born in 2018.

One of the best singers of today, John Legend has accumulated an estimated net worth of $45 million. The star makes the jaw-dropping amount from his singing career.

Luna Simone is the first child of musician John Legend with his wife Chrissy Teigen. She was born on April 2016.