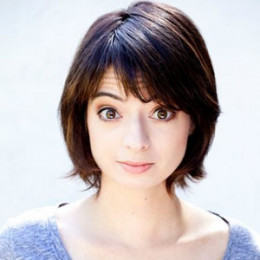 Kate Micucci is an American actress better known for her role Stephanie Gooch in Scrubs and Shelly in Raising Hope. She is also a vocal actress, comedian, singer, songwriter, and artist. She has given her voice in Steven Universe, Milo Murphy’s Law, Nature Cat, DuckTales and has done some commercials as well.

Kate Micucci was born on 31st March 1980 in Jersey City, New Jersey. Later she with her parents moved to Nazareth, Pennsylvania, in Lehigh Valley and it is where she grew up. She is a brilliant piano player which was taught by her mother.

She attended Nazareth Area High School along with rock musician Jordan White in 1998. Later, she received an A.A. (Associate Degree) in Fine Arts from Keystone College in La Plume, Pennsylvania and completed B.A. in Studio Art from Loyola Marymount University, Los Angeles in 2003.

Kate began acting career from American television sitcom, Malcolm in the Middle, created by Linwood Boomer, in 2006. She got a chance to work with Frankie Muniz, Jane Kaczmarek, Bryan Cranston, Christopher Masterson, Justin Berfield and so on. The same year, she was seen in How I Met Your Mother and Four Kings.

In 2007, she made an appearance in Beat the Street where she portrayed the character of Roxy. Though she made several appearances in movies, her recurring role Stephanie Gooch in comedy-drama television series, Scrub, made her popular among the viewers. She was also awarded G4TV named Micucci the #1 Woman of Comedy which was one of her greatest achievement.

She is one-half of the musical comedy duo Garfunkel and Oates. It is an American comedy-folk duo operating out of Los Angeles, California consisting of actresses and songwriters Riki Lindhome and Kate Micucci. The duo was first introduced to each other by comic Doug Benson and started working together to adapt Imaginary Larry, a film made by Lindhome.

In 2009, they sang, Fuck You, which featured in the Scrubs episodes, My Lawyer’s in Love. Her next show was held at Steven Allen Theater on Hollywood Boulevard, California in 2011. She occasionally performs with Riki Lindhome at the Upright Citizens Brigade Theater in Los Angeles.

Moreover, she has given her voice in 3D computer-animated musical comedy movie, Rio 2, directed by Carlos Saldanha in 2014. Not only in Rio 2, she has her voice of Popsicle in The SpongeBob Movie: Sponge Out of Water, Velma Dinkley in Lego Scooby-Doo! And WWE: Curse of the Speed Demon and Clayface in The Lego Batman Movie.

Kate is currently single and leading a single life. Due to her secretive nature, her personal life and love affair are out of media.

According to the sources, she has never dated anyone till this age of 37. Looking at her nature, she is probably trying to build a career first and then only settle down with a suitable man to make her husband.

Being a successful actress and singer of the industry, Kate has collected an estimated net worth of $500 thousand. Her source of income includes acting, singing, voice acting and some commercials as well.