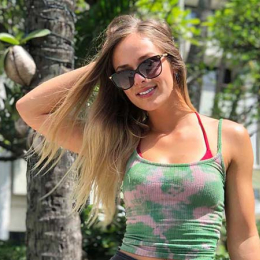 Kelsey Henson lies upon one of those famous Canadian Instagram stars who is famous for her stunning physics and beautiful face. She caught the limelight after dating and marrying popular Icelandic professional strongman and actor Hafpor Julius Bjorsson.

Personal Life of Kelsey Henson; Is she Married?

Kelsey Henson is currently married to her long term boyfriend turned husband Hafpor Julius Bjorsson. The duo shares a good bond and now they have been together for over two years. The pair met for the first time when Kesley was working as a waitress in a bar in Alberta in 2017. Her future husband was visiting the town for a strong man competition and visited the restaurant she worked at.

She asked the Game of Thrones star for a picture and things started since then.

Famous Canadian Instagram star and her husband Hafpor Julius Bjorsson at their wedding.

After dating for over two years the duo finally decided to take the next step and shared the wedding vows on October 21, 2018. Their close friends and family attended the marriage ceremony and it was held in Iceland.

The actor and strongman revealed about his marriage via an Instagram post sharing an image of himself carrying his new bride.

A fan of the pair once asked how they share a kiss despite their vast height difference, where Henson revealed, 'ahha he bends, I tip toe. Or just say screw it, pick me up!'

It is with great pleasure that I now get to call Kelsey Morgan Henson my wife!. I get to hold this beautiful woman through thick and thin for the rest of our lives! I’m so excited for all of the future adventures we will tackle side by side. @kelc33 #justmarried

From the gym to a trip at Platinum Heritage Dubai and red carpet events, the lovely duo is always together. Well, their love and dedications towards each other prove it all.

Presently, she is happily living with the love of her life and the relationship between the newly wedded couple seems smooth as there is no sign of divorce between them.

What is the Net Worth of Kelsey Henson?

Kelsey Henson holds an estimated net worth of $100,000, she garnered that fortune working as a constant Instagram star. In addition, the average salary of an Instagram sensation depends upon the popularity of the person and his/her's followers number.

What a whirlwind the last few days have been! It was absolutely amazing to walk the red carpet with my husband @thorbjornsson at the last premiere of Game of Thrones Season 8. Big thank you to my stylist @mr_wein and hair and make up artist @tinnaempera for getting me red carpet ready, you guys are the greatest! Dress @cushnie Suit @kingbrosclothiers

Henson's husband is a well-established bodybuilder and actor who holds an estimated net worth of $2 million. Further, Bjornsson won many competitions like Arnold Classic Champion(2 times), Europe's Strongest Man(5 times), Iceland's Strongest Man(8 times). In fact, he was named as the World's Strongest Man 2018.

Kelsey Henson is currently married to her long term boyfriend turned husband Hafpor Julius Bjorsson. The duo shares a good bond and now are together in a relationship over two years.