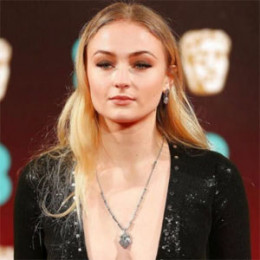 Sophi Turner, a British actress, made debut in Hollywood from the series, Game of Thrones from which she earned much of the fame and the appreciation. Besides from GOT, Turner is recognized for her movies and series like The Thirteen Tale, Another Me and X-Men among others. The beautiful actress, recently in 2017 got engaged to the Cake by the Ocean singer, Joe Jonas.

Sophie Turner was born on 21st February 1996 in Northampton, England. She is British and belongs to White ethnicity. Turner's parents, Sally (a nursery school teacher) and Andrew Turner (works for pallet distribution company) raised her along with her two brothers, Will Turner and James Turner in a big Edwardian house. She had a twin who died before her birth.

Turner finished her schooling at Warwick Prep School and The Kings’s High School for Girls. From a very early age, she was interested in acting so became the member of Playbox Theater Company.

Sophie Turner made her Hollywood debut from the popular HBO series, Game of Thrones (GOT) in 2011. She portrayed Sansa Stark, a young woman with a naive view of the world, but after suffering all the cruelty and betrayal turns into a hardened and learned individual. She shared the screen with stars Emilia Clarke, Kit Harington, Lena Headey, Maisie Williams, Peter Dinklage, Nikolaj Coster-Waldau and Natalie Dormer in the series.

In 2013, Turner appeared as a lead in the movie, Another Me. During the same year, she worked in a series named, The Thirteenth Tale starring Venessa Redgrave, Olivia Colman, Emily Beecham, Steven Mackintosh, Tom Goodman-Hill and Robert Pugh among others.

Turner, at present, is working in the movies, Alone, Huntsville, Time Freak, and X-Men: Dark Phoenix.

The star of GOT, Turner got engaged to her boyfriend turned fiance, Joe Jonas in 2017 which they announced via social media posting the pictures of the giant diamond ring. They even threw an engagement party in November 2017 which was attended by Ashley Graham, Ansel Elgort, and others.

In November 2016 they pair were seen together in Netherland, and it is when the rumors flew about their dating. One of the fans even captured a picture of them getting cozy on their night out. After the revelation of the picture, they both strictly denied about being in a relationship. However, in Jan 2017, they made their relationship public via Instagram and on October got engaged.

After appearing in several series and movies, Turner was nominated for several prestigious awards and won some of them like:

Sophie Turner after appearing in several movies and series is successful to collect a decent net worth of $18 million.

As per the records, her co-stars like Emilia Clarke, Kit Harrington, Peter Dinklage made 300k per episode for season 5 and 6 which subsequently increased to a whopping $1.1 million for season 7 and 8. Turner may not make as well as them, but sources claim that her pay also increased for season 7 and 8, most probably a six-figure paycheque.

Turner 2016’s movie, X Men: Apocalypse earned $543.9 million at the box office in which she appeared along with James McAvoy, Michael Fassbender, Jennifer Lawrence, Oscar Isaac, Nicholas Hoult, and others.