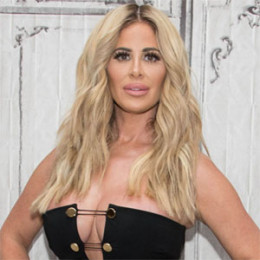 Kimberleigh Zolciak-Biermann is an American TV personality, singer, and an entrepreneur best known as Kim Zolciak. She gained recognition after appearing on the reality show, The Real Housewives of Atlanta. She is also a singer, Tardy for the party is her first single which became a hit. Apart from her professional life, Zolciak is a married woman and has six children.

Born as Kimberleigh Marie Zolciak on 19th May 1978 in Pensacola, Florida. She is an American by nationality. As far as her ethnicity is concerned, she belongs to Polish and Italian descent. Zolciak was raised by her parents, Joseph and Karen along with her brother Michael.

Regarding her academics, she finished her high school from the East Catholic High School in Manchester, Connecticut after which she attended the University of Connecticut and studied nursing, eventually earning a license as a practical nurse.

Kimberleigh Zolciak began her TV career in 2008 with the reality TV series, The Real Housewives of Atlanta alongside Nene Leakers, Kandi Burruss, Porsha Williams, Kenya Moore, Cynthia Bailey and others. She left the show in the middle of the fifth season in 2012. Then she appeared on the reality show, Don’t Be Tardy for the Wedding along with her then-fiancé for her wedding preparations. The show was named Don’t Be Tardy… since 2016.

In 2015, she participated in an American TV show, Dancing with the Stars, in its 21st season with Tony Dovolani, but she withdrew from the show because of a transient ischemic attack that strictly prevented her from air travel.

She made her debut on the dance track, Tardy for the Party which became one of the remarkable works of her life. The song was appreciated by most of the audiences and was downloaded over twenty-nine thousand times only in the first week.

Zolciak along with RHOA cast member, Kandi Burruss produced and wrote a song, Rodney ‘’Don Vito.'' Later, she claimed that the song was written by her daughter and worked on by Burruss. As of 2016, she has launched a line of skin care products under the brand name Kashmere Kollection. She is soon to release her own perfume brand.

Kimberleigh became a mother at a very early age of 18, she gave birth to her first daughter, Brielle, on 25th February 1997. She till now has not disclosed the biological father of the child.

On 5th May 2001, she got married to Daniel Toce. They welcomed a daughter on 17th October 2001 and named her Ariana. The pair divorced two years later, in 2003.  Following the separation, news came out that her ex-husband was arrested on the accusation of molesting teenagers.

In 2010, Zolciak was romantically linked to DJ Tracy Young, she even announced she is bisexual. On 11th November 2011, Zolciak married Atlanta Falco football player, Kroy Biermann, at their Roswell Georgia home.

They met for the first time at the charity event of Dancing with Atlanta Stars. The couple parents six children currently. Biermann even gave his last name to Zolciak's two daughters from her previous relationship.

Even though the duo is one of the most followed couples around, the pair once got separated. At first, the duo was keeping their dating life behind closed doors but it wasn't until they were photographed together in various events which led to their relationship confirmation.

But then out of the blue, Kroy sent her a text that he wants to get separated from her and provided little to no information as to what was the reason. At that time, she was feeling all sorts of bad feelings for him. She said,

“He won’t tell me why, which just pisses me off. I’m a very black and white person. He doesn’t respond and tell me why. Fine, whatever. So I can’t sleep that whole night, which is totally out of character for me. Usually I’m like, ‘F*** him, like, they’re a dime a dozen, like, see ya!’ Well, I couldn’t sleep.”

After a few days, Kroy realized it was all a mistake and sent her flowers a few days after the incident and the duo got back together.

Net Worth and Body Measurements

The 39-year-old TV personality, Kimberleigh Zolciak has an estimated net worth of $1.5 million. Most of her income stems off from reality shows, her business, and her short music career.

She currently lives a lavish life with her family-husband and four children. The family owns a Jeep worth $30k, a Range Rover worth $85k and a Porsche among other things. Zolciak's husband Kroy Biermann loves gifting her, at the time of their engagement he gifted her a $5k designer shoes and a $10k diamond ring.

On 5th May 2001, Kim Zolciak got married to Daniel Toce who after the divorce was arrested in accusation of molestation. The couple even has a daughter together who is now living with her mom.

Kim Zolciak got married for the second time to an Atlanta Falco football player, Kroy Biermann on 11th November 2011. The couple is still together with their four biological children and two from Zolciak's previous relationship.

When Kim Zolciak was at the age of 18, she gave birth to her first child, Brielle Biermann on 25th February 1997 but the biological father of her firstborn is not revealed yet. She is adopted by her stepfather, Kroy Biermann.

On 5th May 2001, Kim gave birth to her second daughter, Ariana Biermann with Daniel Toce. Currently, she is also adopted by Kroy Biermann and also gave his last name to her.

On May 31 2011, Kim gave birth to her first child from Kroy Biermann and named him as Kroy Jagger Biermann. He is currently 6 years old and known as KJ as well.

On 25th November 2013, Kim and Kroy welcomed twin daughters among them Kaia Rise Biermann is one.

On 25th November 2013, Kane Ren Biermann is the youngest of all the children and he is the other twin.