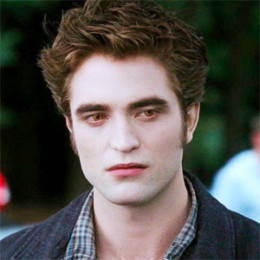 Popular for portraying the role of the sexy vampire, "Edward Cullen", in the movie, Twilight, Robert Pattinson is one of the leading actors in Hollywood. For the role, he was nominated for various prestigious awards and won some of them including- Teen Choice Awards, MTV Movie Awards, and People’s Choice Awards among others.

Pattinson made his big screen debut in 2004 from the movie, Vanity Fair. Along with acting, Pattinson is also involved in modeling and music. He started modeling from the very early age of 12. Being a versatile actor, he earns an impressive amount of net worth.
Regarding his personal life, he is currently single after many high profiled breakups, notably from the actress Kristen Stewart and his called off engagement from singer FKA Twigs.

Robert Pattinson was born Robert Douglas Thomas Pattinson on 13th May 1986 in London, England under the birth sign Taurus. Pattinson is British as per nationality and holds Caucasian ethnicity.

Pattinson is the son of Richard Pattinson (vintage cars importer) and Clare Pattinson (worked for a modeling agency). His parents raised him with his two sisters- Victoria and Elizabeth Pattinson (singer) in Barnes, London. Until the age of 12, he attended Tower House School and later shifted to The Harrodian School.

Despite his shy nature, Pattinson loved to perform from his early age. His father encouraged him to do acting. Later, he got involved at the Barnes Theater Company and auditioned for his first drama role, Guys and Dolls. He performed in various plays at the theater which helped him to earn a professional role later.

Robert Pattinson jumped from the theater to movies in 2003. He made his debut in 2004 from British-American historical drama movie, Vanity Fair directed by Mira Nair. The same year, Pattinson appeared in his first German TV series, Dark Kingdom: The Dragon King directed by Uli Edel.

The following year, Pattinson did the supporting role in Harry Potter and the Goblet of Fire for which he got entitled as "British Star of Tomorrow." In 2008, he landed his breakthrough role of Edward Cullen, the most loved vampire in the movie, Twilight. He worked for the subsequent sequels of the movie and gained huge popularity.

Apart from Twilight franchise, Pattinson also worked in several other critically acclaimed movies, Life, The Rover Good Time, Remember Me, and Cassopolis among others. As of 2018, he's worked in two movies, Damsel and High Life.

Damsel was released in January 2018 and is directed by David Zellner. Whereas, his another movie, High Life is yet to be released.

From the young age of 12, Pattinson started his modeling career. His androgynous look (combination of masculine and feminine characteristics) helped him to get many jobs as possible. In 2007, he appeared in the advertisement campaign for the Hackett, the British menswear retailer.

In November 2010, Pattinson was offered $1.23 million to be the face of Burberry- the iconic British Luxury Brand which he turned down later. Two years later, he became the face of Dior Homme fragrance and appeared in the advertisement campaign of 1000 LIVES by Romain Gavras. Pattinson was announced as a brand ambassador for Dior Homme Menswear in 2016.

Aside from modeling and acting, Pattinson is also involved in music. He composes his own music and plays piano and guitar as well. He worked as a singer on the Twilight soundtrack: Never Think and Let Me Sign.

Later, Pattinson played guitar in Death Grips’ song, Birds from the album, Government Plates. As per some gossip mongers, he is contributing to the music of his 2018’s movie, Damsel.

Pattinson has been nominated for prestigious awards for his performances and won some of them. Some of the notable awards that he won include:

In 2010, Pattinson's wax statue was built in the Madame Tussauds, wax museum collection in London. The following year, his signature, hand, and footprints were put in wet concrete at Grauman’s Chinese Theater, a movie palace.

Timur Kryachko, Russian astronomer named his discovered asteroid after Pattinson name as 246789 Pattinson in 2014. In 2017, he was given a tribute at Deauville American Film Festival as well.

Robert Pattinson is one of the dashing eligible bachelors of Hollywood. Pattinson was engaged to his girlfriend, FKA Twiga aka Tahliah Debrett Barnett, English singer and dancer.

The couple started their relationship in 2014 and got engaged 7 months later. They were first photographed together in September and later in December being cozy together. When the fans were waiting for their grand marriage, the couple called off their engagement in 2017, shocking everyone.

After the break-up, he became close to Katy Perry, a very close friend of him. Some months after the broke up, he was spotted with a blonde unknown lady attending Seth MacFarlane’s annual holiday party in LA. However, he has not confirmed about his relationship so, he might be possibly single in the present days.

Prior to this, Pattinson dated his co-star from the movie, Twilight, Kristen Stewart. At the initial phase of their relationship, they were spotted at various places, award ceremony and events by paparazzi and tabloids. Despite everything, the couple always remained silent about their relationship in public.

In July 2012, his girlfriend, Kristen cheated on Pattinson with Rupert Sanders, a movie director. They were found smooching and kissing in a car park. Kristen herself accepted that she cheated upon her boyfriend and felt so embarrassed and issued a public apology,

‘’I’m deeply sorry for the hurt and embarrassment I've caused to those close to me and everyone this has affected. This momentary indiscretion has jeopardized the most important thing in my life, the person I love and respect the most, Rob. I love him, I love him, I'm so sorry.’’

The couple with an on-off relationship finally broke up after such incident. Soon after the separation, Stewart came out to be a bisexual and the ex-couple moved on with their respective partners.

Donald Trump, the president of the United States of American also posted several tweets slamming Kristen Stewart regarding her failed relationship with Robert Pattinson and her infidelity. He tweeted:

‘’Robert Pattinson should not take back Kristen Stewart. She cheated on him like a dog & will do it again… just watch. He can do much better!’’

‘’Lots of response to my Pattinson/ Kristen Stewart reunion. She will cheat again- 100 certain—am I ever wrong?’’

‘’Everyone knows I am right that Robert Pattinson should dump Kristen Stewart. IN a couple of years, he will thank me. Be Smart, Robert.’’

‘’Robert Pattinson is putting on a good face for the release of Twilight. He took my advice on Kristen Stewart…I hope!’’

After some years, Pattinson responded to Trump’s tweet saying,

In 2017 Stewart appeared in the show, The Late Show with Stephen Colbert where she addressed the issue with the current president.

Pattinson was given various titles by several magazines which are listed below:

2009 = The Most Handsome Man in the World by Vanity Fair.

Robert Pattinson has an estimated net worth of $100 million dollars and earns $25 million per annum. As per TMZ, Pattinson earned $2.5 million and extra $300k bonus for the first Twilight. Later, he earned $25 million for the 2 installments for Breaking Dawn. Below is the list of his net worth in different years:

Pattinson has worked in various hit movies that made a good collection at the box office. Here are some of his hit movies:

Pattinson has a Spanish Colonial costs $6.5 million. He also has a Hollywood Hills Mansion which he bought for $2.1 million. He has a collection of luxury cars including

Pattinson raised $56k for AIDs Research at the amfAR Cinema Against AIDs benefit after he auctioned off two kisses. In 2010, he donated his artworks which was auctioned on eBay. The fund from the auction was given for the organization who was working for the missing children.

Later, Pattinson sold his sketch and drawing, Unfinished City for $6400 which was donated to an Arizona-based homeless center, Ozanam Manor. The year, he raised a huge money from signing off guitar for the charity telethon Hope for Haiti: A Global Benefit for Earthquake Relief. He also raised $800k for a national non-profit organization, GO Campaign that helped to funds to help orphans and vulnerable children.

At the Charity Auction in 2013 at the GO Gala charity auction, he bought an instrument that was made from the recycled items for $5600. He also offered himself as a prize for one of his fan who paid $85k to visit him.

Below is the video of Robert Pattinson's interview on Jimmy Kimmel Live: