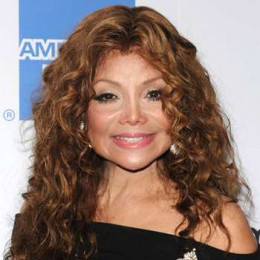 La Toya Jackson is a singer, songwriter, businesswoman, activist, author, television personality of American nationality who is known best for being the fifth child of the Jackson family. She has had songs like Just Wanna Dance, Starting Over and Free the World. She was born in Gary, Indiana to Joseph Jackson and Katherine Jackson and is one of the siblings of the great Michael Jackson.

Born La Toya Yvonne Jackson on May 29, 1956, in Gary, Indiana, U.S. La Toya Jackson is the daughter of Joseph Jackson and Katherine Jackson.

She is American and belongs to the African-American ethnicity. She is the fifth of ten children and the middle female child of her parents including Rebbie Jackson, Janet Jackson, Michael Jackson, Jermaine Jackson, Tito Jackson, Jackie Jackson, Marlon Jackson, Randy Jackson, Joh'Vonnie Jackson, and Brandon Jackson.

La Toya and her sisters Janet and Rebbie appeared in all the episodes of The Jacksons.

She is also famous for her singles 'Free the World' and 'Just Wanna Dance'.

She appeared in her own reality TV series the Oprah Winfrey Network, Life with La Toya from 2013 and 2014.

Jackson has an estimated net worth of about $4 million as of 2019. She makes the amount from her career as a singer.

La Toya has had a well-known personal life history. She has had several well-known celebrity relationships and is currently engaged to be married as of now.

Welcome to Los Angeles @EvineLive it was lovely seeing everyone last night! Gonna miss you all today! Have fun @nancypeaceandlove with the girls! #latoyajackson #Evine #evinelive

She was previously married and divorced with her former manager Jack Gordon. The couple tied the knot in 1989 but divorced in 1997 with a son together named Oche Jackson.

She was exiled from her family following her controversial marriage with businessman Jack Gordon.

Meanwhile, she claimed that she was a victim of sexual abuse. She stated that her father molested her as a child.

Following the controversy of Michael Jackson's documentary Leaving Neverland, video of La Toya's 26-year-old interview resurfaced in the media where she mentioned that her brother committed "crime against innocent children".

The devastating and disturbing movie premiered on 25 January 2019. The movie is basically focused on two men who claimed that Michael abused them as children.

She mentioned that her mother was totally outraged when she found out Michael paying cheques to parents of "little boys" after sexually abusing them.

In the rare interview, she said,

"There were two cheques that I know of that she has shown me and it’s for a substantial amount of money and she was outraged over it."

"My mother is very much aware of the children that were there. All the boys that stayed there. She’s the one who always said that Michael, excuse my expression ‘that f***ot.’ She would say ‘I can’t stand him. That damn f***ot. I can’t stand him.’"

“That’s what she would say all the time. She knows it. And now she’s denying it and that’s what hurts.”

In 1993, the Jackson family mentioned that La Toya's husband forced her to make the false sexual allegations against Michael.

When La Toya's comments against her brother Michael resurfaced on media with the airing of the documentary series, she was estranged from her family. The case was settled out of the court for over $20 million at the same moment years back.

At present, she still believes that the claims were true. She mentioned that her mother showed her hush-money payments in huge amounts to the more youngest's families.

Jack Gordon was the husband of La Toya. They were married for a short period of time and have a son together.

Oche is the only son of La Toye.