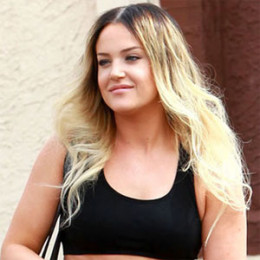 American ballroom dancer and singer, Lacey Schwimmer is best known as the fourth finalist of the third season of So You Think You Can Dance. She also appeared as a professional dancer in the dancing show, Dancing with the Stars. Schwimmer is currently dating a musician and composer, Frankie Moreno, soon to be her husband.

Lacer Schwimmer was born Lacey Mae Schwimmer on 29th June 1988 in Redlands, California under the birth sign Cancer. Schwimmer is American as per nationality, and as far as her ethnicity is concerned, she is White.

Her parents, Laurie Kauffman and Buddy Schwimmer (West Coast Swing dancer) raised her along with her brother, Benji Schwimmer.

From the age of six, Schwimmer started learning dancing. At seven, she competed in the 1995 U.S. Open Swing Dance Championships with her partner, Brian Cordoba.

She stood first in the Young American Division at the 1998 U.S. Open Swing Dance Championship at the age of 10. In 2003, she competed at a junior level with Jared Murillo and later upgraded to youth level.

Schwimmer also appeared in a music video, Candyman by Christina Aguilera. In 2005, she made her cameo in the American sitcom, The Suite Life of Zack & Cody with the cast Cole Sprouse, Dylan Sprouse, Ashley Tisdale, and Kim Rhodes among others.

Lacey Schwimmer started her professional career from the reality show, So You Think You Can Dance. She gave the preliminary audition on the third season of the show partnering with her brother, Benji Schwimmer (winner of the previous season).

After being selected for the top 20, she paired with Kameron Bink, a contemporary dancer and later paired with Neil Haskell, Danny Tidwell, and Pasha Kovalev.

In 2008, Schimmer appeared in another reality show, Dancing with the stars as a professional dancer. She paired with many celebrities like Lance Bass, Steve-O, Mark Dacascos, Kyle Massey, Mike Catherwood and Chaz Bono.

Lacey Schwimmer began her music career in 2010 as a singer for Cash Cash’s song, Red Cup (I Fly Solo). A year later, Schwimmer released her first single, Love Soundz. The song became popular among the youngsters and also listed on iTunes.

In 2012, she appeared as a singer for It Boys' song, Burning Up. She also made appearances in various TV shows like- The Ellen DeGeneres Show by Ellen DeGeneres, Good Morning America, and Jimmy Kimmel Live! among others.

Lacey Schwimmer, the famous ballroom dancer, is currently dating her boyfriend, soon to be husband, Frankie Moreno. He is an American musician and a singer. The pair started dating 4- 5 years ago after meeting for the first time through a mutual friend.

Before, she dated Tyson Ritter, American singer-songwriter. But their relationship did not last long and eventually broke up.

The 29-year-old dancer and singer has the height of 5 feet 3 inches (1.6m). Schwimmer through her dancing and singing career has successfully accumulated an estimated net worth of $1.5 million.

As per some sources, the average salary of professional dancers on Dancing With Stars is $30k. Schwimmer has participated in the show multiple times making a good sum. Schwimmer was also the fourth finalist So You Think You Can Dance.