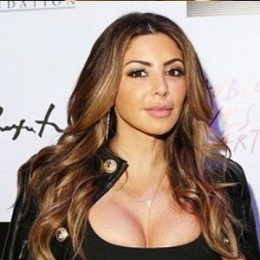 Famous for working in the hit TV series The Real Housewives of Miami, Larsa Younan is an American model and actress. She is known for being the wife of famous NBA player Scottie Pippen. She is also popular as the best friend of Kim Kardashian as well as featuring in Keeping Up with the Kardashians.

Larsa Younan is possibly single at the momenta but is still linked to her spouse of twentyone years for the sake of their three children. News had it, Younan left Pippen cause of her alleged fling with Future which she strongly denied.

Despite that, the speculation goes on. The baby mama recently took to social media to address the rumored love affair again. Her relationship with Scottie was mentioned in the sports miniseries "The Last Dance".

Larsa and Scottie shared one of the longest unions in NBA history. They hitched in 1997 and lived together for decades until their eventual split in fall of 2010s.

People though Younan and Pippen were living a sound life and have a blissful relationship with their four kids white it's reported in October 2016 that the NBA star filed for divorce.

Though, the two are no longer in a marital relationship, Larsa is hopeful that she and Scottie will always do best for their 4 sons and jointly raise them with love and respect.

She notably thanked everyone for understanding and kindly requested for privacy from the media amid this tough time of transition for her family.

Previously, she was married to the famous American Basketball player Scottie Pippen. The pair first met in the year 1995 and soon started dating for two years after which they finally decided to share the wedding vows on the 20th of July 1997 in a private marriage ceremony.

Larsa was once rumored to be dating the famous rapper Future. They both first meet at the Haute Living Color Reveal Party in Miami, Florida in August of 2016. They both were thought to be dating and Larsa was even said to have traveled with the rapper in his private jet.

In fact, after Larsa's separation with her husband, she was partying with Kourtney Kardashian in Beverly Hills in a party hosted by Future. Despite all these events, Larsa and Future never admitted of dating each other.

He claimed that his wife Larsa was cheating with him against the rapper Future. He even explained that he wanted the full custody of their four children but after a certain time, the couple started to hang out together and stayed together and the divorce was withheld.

Eventually, after the two years of their first divorce event, Larsa this time filed for divorce from her husband in LA Country Superior Court on 2nd of November 2018. Larsa stated 'irreconcilable differences' as the reason to file the divorce.

The Real Housewives of Miami star asked the court to decide how the children and the property should be divided and since this event, the duo is finally separated and do not live with each other, however, they have decided to be good friends to raise their children together.

The family used to live in Chicago happily together, however, after Scootie and her wife Larsa's separation they are now living in different places.

What is the Net Worth of Larsa Younan?

Larsa Younan holds an estimated net worth of $3 million all thanks to her modeling and acting career. The ex-model garnered a good sum of love and money from her modeling career, and besides, the average salary of a model is $32,000-$48,000 which depends upon the venue and brand. Moreover, the average salary of a reality show star is $50,427 per year which also depends on the popularity of the show.

She is the long term best friend of the Kourtney Kardashian and Kim Kardashian West who has an estimated net worth of $35 million and $300 million, respectively.

When you can’t find sunshine be the sunshine. Outfit: @missyempire #ferrari

Moreover, Larsa's soon to become ex-husband is a famous NBA player and holds an estimated net worth of $50 million. As being a star she owns a couple of cars which includes one black colored Ferrari, costing $335,275.

Lara Younan was born on 6 July 1974 in Chicago, Illinois, the USA under the birth sign of Cancer. She is of American and Syrian nationality. Her father is of Syrian and mother is of Lebanese descent.

The 44-year-old studied at the University of Illinois and graduated from there with a bachelors degree in Political science. Next, she joined the Piven Theater Workshop to improve her acting skills under the teaching of Byrne Piven. After her graduation, she self wrote on subjects like fashion and beauty with the addition of fitness and healthy living.

Larsa Younan is currently married to the famous American Basketball player Scottie Pippen. The pair first met in the year 1995 and soon started dating for two years. After which they finally decided to share the wedding vows on the 20th of July 1997 in a private marriage ceremony.

Larsa and Scottie are the blessed parents of their four children among which the youngest child is Scottie Pippen Jr.

Larsa and Scottie are the blessed parents of their four children among which their second child is Preston Pippen.

Larsa and Scottie are the blessed parents of their four children among which their third child is Justin Pippen.

Larsa and Scottie are the blessed parents of their four children among which their only daughter is Sophia Pippen.