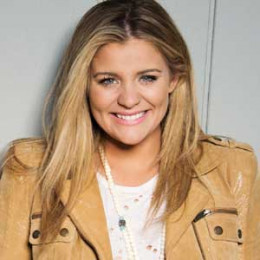 Lauren Alaina is an American singer and songwriter. She is the winner of the competition The Southern Stars Pageant. Ariana has written several songs like Leaving and Set me Free. She performed in the PBS special for Barack Obama and Michelle Obama. Ariana’s released single Road Less Travelled reached number one on the Billboard Country Airplay chart. Alaina is in a romantic relationship with her boyfriend, Alexander Hopkins.

Lauren Aliana was born on November 8, 1994, to Father J.J Suddeth, a process technician and mother  Kristy in Roseville, Georgi, U.S. She is American and belongs to White-American ethnicity.

Her parents got divorced in 2013 because her father was an alcoholic. But later in 2013 her father became sober and remarried her mother.

Aliana attended Lakeview -Fort Oglethorpe High School in Fort Oglethorpe, Georgia. She was a cheerleader in high school. During Lauren's teen years, she suffered from bulimia because of her eating disorder for more than four years.

Lauren started singing at the age 3. She used to perform in the church, restaurant, family holiday. At the age of eight, she participated in the talent competition  Southern Stars Pageant and win the show.

Alaina was also allowed to perform on the festival’s big stage. She traveled to Orlando, Florida for the American Model and Talent Competition at the age of ten. She won the event and sang with Georgia Country Gospel Music Association's children’s group.

In 2009, Aliana was the first winner of the WinnisSTAR Youth talent contest at Lake Winne Lake Winnepesaukah amusement park. Alaina is also a songwriter of several songs like “Leaving and “Set Me Free.”

The 22-year-old singer was also a participant in the American Idol season ten. She auditioned from Nashville, Tennessee. Steven Tyler, one of the judges of the show said 'We found the one' after her performance.

As a matter fact May 14, 2011, was proclaimed Lauren Alaina Day in her hometown. She made the finals competing against Carrie Underwood, but unfortunately, she couldn't win the competition. She was the runner-up.

Alaina’s debut album Wildflower was listed at number five on the US Billboard 200 chart which was sold 69000, copies the first week. The single Georgia Peaches ranked twenty-eight on the Billboard Hot County song chart.

She also got a chance to perform for Barack Obama and Michelle Obama in the PBS Special In Performance’’ At The White House” on November 21. She sang the National Anthem at the Thanksgiving Day game.

At 2012 Alaina was selected as the New Artist of the year. Her track titled “Antarctica: One World, One family” is used as a theme song in the SeaWorld attraction Antarctica: Empire of the Penguin.

She released the single the “Road Less Traveled” which was co-written with Meghan Trainor and Jesse Frause, on July 11, 2016, reached number one on the Billboard Country Airplay chart.

Lauren Alaina is in a romantic relationship with her longtime boyfriend, Alexander Hopkins. The couple is together since 2012. The couple often posted their romantic pictures on their Instagram.

The duo shared a healthy relationship with one another. The duo engaged in July 2018.

On November 24, 2011, at the Detroit Lions vs Green Bay Packers game on Thanksgiving Day, Alaina forgets the words to the national anthem which create controversies at that time.

As of 2019, Lauren's net worth is estimated to be around $800k. She has an annual salary of $60 thousand from her profession.

Besides this, she charged a handsome sum for national and international concerts.