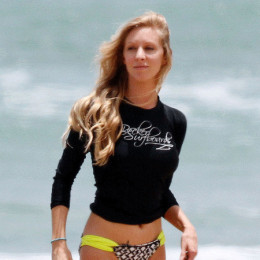 Leah Felder is a member of American-based indie pop group team Brandon and Leah Jenner. The star is a mother of a child whom she shares with a TV personality Brandon Jenner who is also her ex-husband.

Leah Felder is single as of now but previously, she tied the knot to an American TV personality, Brandon Jenner in 2012. Their marriage was performed in Hawaii outside the St. Regis Princeville Resort in the presence of their family and friends. The couple shared a child, a daughter Eva James Jenner born in 2015.

A post shared by MartinRoberts Design (@martinrobertsdesign) on Jun 8, 2015 at 1:14am PDT

Everything was going fine until 2018. After almost 6-years of their wedding life, they finally separated. The former husband-wife couple shares a joint physical and legal custody of their child.

Following the divorce, Leah remained single whereas Brandon started dating girlfriend Cayley Stoker. In 2019, the couple announced that they were expecting twins.

Leah Felder was born on 24th November 1982 in California. She is a daughter to former Eagles guitarist Don Felder and Susan Felder.

From her young age she had keen interest in surfing, diving, fishing and she was also infatuated with the arts. She started dancing when she was four years old. She has also appeared in popular TV reality shows Keeping Up with the Kardashians along with her husband. Her band first debut album EP, Cronies was a huge success and it charted to #24 on the Billboard Digital Albums chart.

She met him when she was just 11 years old. After dating for 8 years they turned their marriage into relationship. Recently they couple disclosed that they are expecting a baby girl via Instagram.