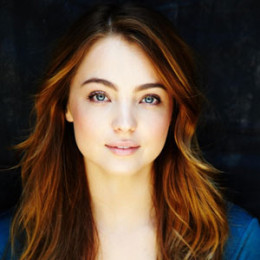 American actress, Liana Cornell is popular for her role in Amazon and Sky co-produced TV series Britannia. Cornell also appeared in several other series including- ABC’s East of Everything, Love Child and Wolf Creek among others. Cornell is also involved in theatre works. As of now, she is not married.

Liana Cornell was born on 24th April in Mullumbimby, Australia under the birth sign Taurus. Cornell is Australian as per nationality and as far as her ethnicity is concerned, she is White.

Her parents, John Cornell, the famous director/writer/actor and Delvene Delaney who's also an actress raised her in Byron Bay. She has two siblings- Allira Cornell and Melissa Cornell.

In 2012, Cornell graduated from National Institute of Dramatic Art.

The 28-year-old Liana Cornell made her debut in the entertainment industry in 2008 from the TV series, East of Everything. Cornell appeared in the series alongside actors Richard Roxburgh, Susie Porter, Gia Carides, Tom Long and Steve Bisley among others.

Cornell then worked in several mini-series including Schapelle, Love Child, House of Hancock and Wolf Creek. But she rose to fame after starring in Amazon and Sky co-produced TV series Britannia. She has shared the screen with actors including Kelly Reilly, Elanor Worthington-Cox, Annabel Scholey, David Morrissey, and Mackenzie Crook among others.

Along with TV series, Cornell also did some theatre works. Her most notable work includes Bell Shakespeare Company’s The Winter’s Tale held at the Sydney Opera.

Liana Cornell, as an actress, has an estimated net worth of thousand dollars as per some online sources but the exact amount still under review and not made public yet.

Liana Cornell is unmarried and has no children yet. She is private about her affairs and relationship. Cornell prefers to hide her personal life far from the limelight.

Till the date, Cornell has not been linked with any of her co-stars, nor there are rumors of her secret boyfriend. So, she might possibly be single at present.

Aside actress, she's also a philanthropist. Cornell founded a philanthropic fund, Save Our Skins that focuses on environmental issues and endangered species.