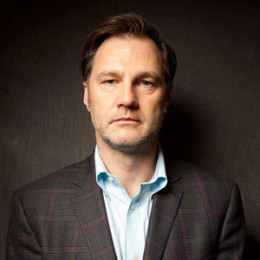 BAFTA nominated director, David Morrissey is also an actor, producer and a screenwriter. Morrissey made debut from the TV series, One Summers in 1983. He then appeared in several movies and TV series winning many nominations for various prestigious awards, securing some including- Royal Television Society Programme Award and Liverpool Daily Post Arts Awards. Morrissey worked in several theater dramas and radio plays. He married his longtime girlfriend, Esther Freud in 2006. The couple has three children together.

David Morrissey was born David Mark Morrissey on 21st June 1964 in Kensington, Liverpool under the birth sign Cancer. Morrissey is British as per nationality and ethnicity wise is Caucasian. He is the son of Joe Morrissey (a cobbler) and Joan Morrissey (used to work for Littlewoods). His father died of a hemorrhage at the age of 54. He has three siblings- Karen Morrissey, Tony Morrissey, and Paul Morrissey.

In 1971, Morrissey along with his family moved from 45 Seldon Street, in Kensington to a modern house on the new estates at Knotty Ash. From the very early age, he was interested in movies, TV, and Gen Kelly's musicals. He decided to pursue a career in acting after watching the movie, Kes by Tony Garnett.

Morrissey attended St Margaret Mary’s School where he was encouraged to act by his teacher, Miss Keller. His teacher then cast him in a school production adapted from The Wonderful Wizard of Oz. After his teacher left the school, he was left without any motivation in acting. Later, he joined De La Salle School where there were no drama classes. He thought that the students in the school did not participate in any lessons due to the fear of bullying.

Morrissey joined Everyman Youth Theater to learn acting. At 14, he became one of the two youth members who sat on the board of the theater. During that time, he became friends with many current celebrities including Mark McGann, Tan Hart, Cathy Tyson, Stephen McGann and Paul McGann.

On 1st December 1985, Morrissey graduated from RADA (Royal Academy of Dramatic Arts). When he was 16, he left school and joined a Wolver Hampton theater company where he used to work on costumes and sets.

David Morrissey worked in several areas including movies, TV series, theaters, and radio. Along with acting, he is also involved in filmmaking. He earned numbers of fan following from his multiple professions.

Morrissey made his TV debut in 1983 from the series, One Summers by Willy Russell. He auditioned eight times for the series and finally got it only after Paul McGann stepped back from the production. In 1988, he worked in his first movie, Drowning by Numbers by Peter Greenaway.

Morrissey then appeared in a number of movies and TV series. He gained popularity from some of the TV series like,

His recent TV series include 2018’s Brittania where he worked with Kelly Reilly, Elanor Worthington Cox, Annabel Scholey, Liana Cornell and Mackenzie Crook among others.

Some of his movies include:

In 1996, Morrissey started his filmmaking career. The same year, he wrote and produced a short film, Something for the Weekend. In 1998, he made his directorial debut from the short film, A Secret Audiences.

Morrissey directed his first 2-part TV film titled, Sweet Revenge in 2001. Some of his filmmaking credits include Sweet Revenge, Passer By, CAST in Beirut and Don’t Worry About Me among others. In 2010, he appeared as a producer in the series, Thorne starring- Aiden Gillen, Eddie Marsan, and Natascha McElhone among others.

Morrissey appeared in several theater and stage plays. In 1986, he performed in WCPC at Liverpool Playhouse. The same year, he acted in Jug at Theater Royal and Le Cid by Declan Donnellan at National Tour.

After the drama, Three Days of Rain (1999-2000), he took a break for some years and made his come back in 2008. He acted in Michael Attenborough’s drama, In a Dark Dark House at Almeida Theater.

Morrissey also worked in several radio plays. In 2000, he appeared in his first radio pastoral comedy, As You Like it broadcasted on BBC Radio 3. The following year, he worked in an afternoon play, The Trail and Tribulation of Armitage Shanks aired on BBC Radio 4.

Some of his other plays include Shut Eye Hold Back the Night (2005), Beckey (2009) and Kermode and Mayo’s Film Review among others.

Morrissey is also involved in narrating series and documentaries. In 2004, he enrolled in narration from the TV series, Zero Hour. The same year, he narrated the TV documentary, Britain’s Boy Soldiers.

David Morrissey was nominated for various prestigious awards and won some of them. Some of the awards he won include:

Morrissey was also honored with several academic honors like

David Morrissey has an estimated net worth of 3 million dollars as per some online sources. Some of his movies that made a good collection at the box office include:

Morrissey played the character of Philip Blake in the TV series The Walking Dead along with stars who are paid a good amount per episode,

Whereas, rest of the main casts earned between $40k-$60k per episode.

David Morrissey is married and has children. Morrissey married his longtime girlfriend, Esther Freud on 12th August 2006 after dating for 13 long years in a beautiful ceremony on Southwold Pier. The couple was first introduced at a dinner party hosted by Danny Webb after which they eventually started dating.

His wife, Esther is a British novelist and also an actress. Hideous Kinky, a semi-autobiography is one of her famous novel which was later adapted into a movie starring Kate Winslet.

Morrissey along with his team of filmmakers ran a series of drama workshops for Palestine refugee children in Lebanon in conjunction with the UN Relief and Works Agency for Palestine Refugees in the Near East (UNRWA) in 2009. A year later, he became a patron of the SMA Trust, a UK based charity that helps to raise funds for medical research.

In 2015, Morrissey rescued terrified refugees from the flimsy small boat. He along with United Nations Refugees Agency went to Greek Island of Lesvos. They saved numbers of people including arriving on the shore including mothers and their babies, young men, old women, and children, in the coast guard and rescued from lifeboats.

Morrissey is a Liverpool FC fan. He is a supporter of Labor Party band Reprieve, human rights organization.

Below, the video is about Morrissey's interview:

On 12th August 2006, David Morrissey married to her longtime girlfriend turned wife, Esther Freud in a ceremony on Southwold Pier. The couple dated for almost 13 years before getting married.

Albie Morrissey is the first child of David Morrissey and Esther Freud in 1996. He was born before his parents got married.

Anna Morrissey is the second child of David Morrissey and Esther Freud who was born in 1999. She is the only daughter of David nad his wife.

After the two children, the couple welcomed their third child, Gene Morrissey in 2006 when they got married.