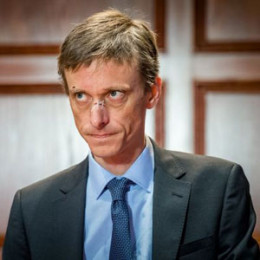 BAFTA Award-winning British actor and a writer is also a director. He is popularly known for his roles in various movies and TV series like- The Office, Pirates of the Caribbean films and BBC four’s Detectorists and Game of Thrones. He is also better known for his perfect comic timing. Crook is a married man who is married to an advertising executive, Lindsay Crook. The couple has two children and currently resides in Muswell Hill, London.

Mackenzie Crook was born Paul James Crook on 29th September 1971 in Maidstone, Kent under the birth sign Libra. Crook is British by nationality and belongs to Caucasian. He is the son of Michael Crook, a British Airways employee and Shelia Crook, a hospital manager. He has a sister, Zoe Crook.

When Crook was a child, he was put on a course of hormone therapy due to a growth hormone deficiency. During the summers, he used to spend time with his uncle in a tobacco farm where he developed his love for painting.

At the young age, Crook used to work at Pizza Hut. He wanted to be a graphic artist before pursuing his career in an entertainment industry.

Crook made his Hollywood career in 1996 from the short film, The Man who Fell in Love with a Traffic Cone. Two years later, he appeared in his first TV series, The Eleven O’Clock Show. Some years later, he was nominated for British Comedy Awards for his amazing performance in the 2001’s TV series, The Office. After the series, he rose to fame and grabbed much of the fan following.

Crook was then featured in Pirates of Caribbean: The Curse of the Balck Pearl (2003), Pirates of the Carribean: Dead Man’s Chest (2006) and Pirates of the Caribbean: At World’s End (2007) in the role of Ragetti, a pirate. He appeared in those movies with Johny Depp, Keira Knightley, Orlando Bloom, Geoffery Rush and Jack Davenport among others.

In 2013, Crook worked in HBO’s hit series, Game Of Thrones with Emilia Clarke, Kit Harington, Sophie Turner, Lena Headey, Maisie Williams, Peter Dinklage and Gwendoline Christie among others. He was nominated for Screen Actors Guild Awards for his appearance in the role of Orell.

The following year, Crook worked in a series, Detectorists with Toby Jones, Rachael Stirling, Divian Ladwa, Lucy Benjamin and Aimee-Ffion Edwards among others. He won BAFTA Television Craft Awards and BAFTA Television Awards for his amazing performance in the TV series.

His latest work includes 2018’s series, Britannia where he shared the screen with Kelly Reilly, Liana Cornell, Eleanor Worthington-Cox and Stanley Weber among others.

Crook made his theatre debut in 2004 in London West End production, One Flew Over the Cuckoo’s Nest opposite Christian Slater. Two years later, he appeared in The Exonerated at the Riverside Studios in Hammersmith.

Crook starred in Ian Rickson’s The Seagull opposite Kristin Scott Thomas for which he earned a nomination from the Evening Standard Theater Awards. In 2009, he appeared in Jez Butterworth’s Jerusalem at the Royal Court Theater. He and the play received a rave review. In 2011, he was nominated for the Tony Award.

Along with acting, he is also involved in direction. He directed a music video for the Paw Paw, London electro band. He alters appeared as a postman in the music video, Dance Tonight by Paul McCartney with Natalie Portman, an actress.

Crook singed a deal with Faber, a publisher to write children’s book. He wrote several books like Ragetti’s SecretDiary (2009), The Windvale Sprites (2011) and The Lost Journals of Benjamin Tooth (2013).

Mackenzie Crook has an estimated net worth of $ 4 million. Some of his movies that made a good collection at the box office include,

In 2010, Crook took part in the fundraising event, We Are One at the Apollo Theatre, Shaftesbury Avenue.

Mackenzie Crook is married and has children. Crook is married to Lindsay Crook in 2001 in a private ceremony. His wife is an advertising executive. The couple shared two children together, one son, Jude Crook and a daughter, Scout Crook.

Below, the video is about Mackenzie Crook's interview:

In 2001, Mackenzie Crook married an advertising executive, Lindsay Crook. The couple has two children, a son and a daughter together.