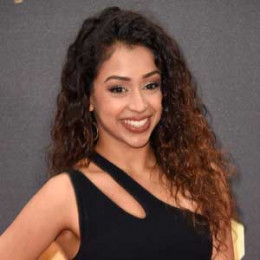 Liza Koshy is the social networking rising star, actress, and YouTube personality. Today she has millions of fan following. Liza is known by her famous online name Lizzza. She is dating her boyfriend, David Dobrik. Both of them are from the same profession and have uploaded many YouTube videos together.

Born in Houston, Texas on 31st March 1996 to an Indian father and white mother as Elizabeth Koshy is of non-Hispanic white ethnicity. She has two sisters named Olivia and Rachel.

While she was in kindergarten, she was admitted to the dual language class due to which she speaks Spanish fluently.

She graduated with a degree in IB diploma from Lamar High School. During her high school days, she was a good dancer and became a dance team captain. Liza joined the college in the Fall of 2014 majoring in Business Marketing.

Liza started her career with Vine, and she downloaded the app as all her friends were using it. She then started uploading her video which gained a lot of views and eventually her followers also increased. Apart from the videos, she was also involved in the TV network.

She debuted in TV network from the series named, Freakish in 2016. The show is about the high school students battling predatory mutants after the chemical plant melted down.

well, would you look at this smart ass 1. YESSSS, YOUTH. our turnout and turn up these midterms are deemed to be record breaking! that's so sexy of us. i feel so proud. and so sexy. 2. also, we came out these midterms with a W, and that W stands for WOMEN. the estrogen was feeling ESTRONG this election. this is to our history-making, narrative-shaping, winning congresswomen! from the youngest women elected (29 yrs old, WHAT), to the first muslim women, from the first black and latina women (for many states), to the very first native american woman and to our LGBTQ+ women, and men too. i am so proud to see, our representatives look more like me. like us. like the U.S. these many firsts are just the start to even more change. thank you for voting and being the change we're SEEING. 3. thank you for poll dancing with me. finding my voice and casting my ballot was *almost* as fun as watching you all do so too. lucky for us, there's more to come and more work to be done. so, let's stay charged, and make change. (that's a decent slogan if anyone wants to purchase from me)

In 2016, she debuted in a movie named, Boo! A Madea Halloween. In the same year, she appeared in FML with Jason Nash. She then made an appearance on YouTube for Christmas Special, Jingle Ballin with the cast member- Aly Mawji, David Alan Grier, and Chris Kattan.

In 2018, she co-created an starred in the web series Liza on Demand.

Koshy is a member of the 2019 Forbes 30 Under 30 Hollywood & Entertainment list.

Liza has an estimated net worth of $4 million. Her primary source of income is from various social media sites and her series and movies too.

The couple rented a house (worth $14.8 million) for a night in Hawai as per the video posted by David on YouTube.

The social networking sensation, Liza Koshy was in a relationship with David Dobrik, a YouTube personality since 2015. The pair posted many romantic and intimate photos on Instagram. It shows they are really close to each other and are deeply in love.

Well, the boyfriend-girlfriend has no intention to get married, and yes there is no rush as they are still very young and have a lot to achieve.

The YouTubers broke up in June 2018 and uploaded a six-minute video sharing the reason why they decided to split and become friends with one another.

She is most probably single at present.