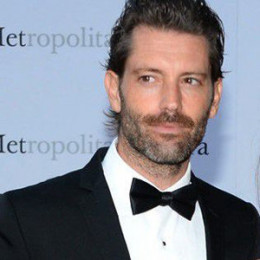 Louis Dowler is a British model born to father Alexander Dowler. There is no information about his education but is supposed to have taken lots of modeling training. Louis has been featured in several models and fashion events including Burberry model campaign and has worked in several worldwide brands such as cover photo and in cover pages of many fashion magazines. He has also acted in some films including A Brother's Kiss, Just One Time, Crash, etc. In addition, he also made the appearance in television series such as Law and Order, Feds, Mercy.

Talking about personal life, Dowler was a married man. But before marriage, he was linked with many women and including Hollywood famous actress Kate Winslet.

Louis is now married to American actress, dancer, and model, Jennifer Esposito who is also an ex-wife of actor Bradley Cooper. The pair who tied the knot in 2014 managed to be together as husband and wife till 2016.

He sued his ex-wife for $43 million in March 2016. As per the lawsuit, she 'hijacked' the company website.

Currently, he's working as a real estate agent for Compass.

Louis Dowler was born in 1975 in Penzance, the United Kingdom to his father Alexander Dowler.

He received a bachelor's degree in strategic marketing.

Louis Dowler married the actress Jennifer Esposito in 2014, after two and half year long relationship. Jennifer was previously married to the actor Bradley Cooper.