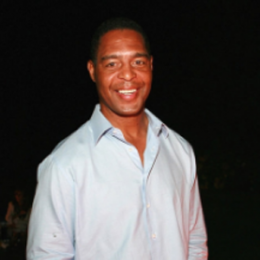 Marcus Allen is an American former professional football running back, currently working as a football analyst for CBS (Columbia Broadcasting System). He played football since school days, and as a pro, he started his career playing for the Los Angeles Raiders. Moreover, he retired from the game after the 1997 season.

Marcus Allen was born to Harold Allen and Gwendolyn Allen as Marcus LeMarr Allen on 26th March 1960 in San Diego, California. He is an American and belongs to African American ethnicity.

He studied at Abraham Lincoln High School in San Diego where he used to play football as a quarterback and safety position. Allen then enrolled at the University of Southern California and graduated in 1981.

While playing at the university, Marcus Allen was selected as a defensive back, but coach John Robinson switched him to tailback. He was part of the Trojan’s National Championship team in 1978.

Allen became a starting tailback in 1980 and rushed 1563 yards which made him the third high scorer of the nation in the year. After playing several games, he gained a total of 2683 yards which led him to win Heisman Trophy, Walter Camp Award, and Maxwell Award. At the end of the fourth season, he received 4664 rushing yards, 46 touchdowns, sharing NCAA record with Ron Dayne and Ricky Williams.

Marcus Allen’s professional career began after being selected by the Los Angeles Riders on the 10th overall selection in the NFL Draft. At the initial period with the team, he rushed 697 yards and was voted for the NFL Offensive Rookie of the Year.

In the following season, he broke the record of 100 yards which became the most significant achievement of his career at the time. In the 1984-85 season, competing at the AFC West Division Championship, he ran 1,759 yards, scoring 11 touchdowns on 380 carries, setting a record 12-4 win for the Raiders. He won the NFL MVP for his performance.

During the same season, the team secured a win over the Washington Redskins 38-9. In 1993, Allen left Raiders and joined Kansas City Chiefs. As a debutant for the team, he scored 12 touchdowns, leading the AFC, as he and Joe Montana led their team to the AFC Championship Game.

In 1993 his fantastic performance in both the playoffs for the Chiefs won him the title of Comeback Player of the Year. The same year, he became the active leader of the team after the retirement of Eric Dickerson.

After contributing much to his team, he finally retired after the 1997 season and was even ranked 72nd on the Sporting News in the list of 100 Greatest Football Players. In 1999, Allen got inducted into the San Diego Hall of Champions Breitbard Hall of Fame honoring San Diego's finest athletes both on and off the playing surface.

After the retirement, he joined sports website, OPENSports.com (a brainchild of Mike Levy) and appeared as a sportsman and a football analyzer on CBS.

Marcus Allen is the father of one child from his longtime girlfriend, Lauren Hunter. They began dating after meeting for the first time on MySpace, a social networking website, in 2012. They welcomed their second child; a son, Drake Connor Allen in 2014.

Before dating Hunter, Allen married Kathryn Edwards in 1993 at O.J Simpson’s Rockingham estate after dating for years. They eventually divorced in 2001 after rumors flew around of his alleged affair with OJ Simpson's wife, Nicole Brown Simpson. Further, he was also romantically linked to an actress, Eileen Davidson, wife of Vincent Van Patten.

Marcus Allen's net worth is $10 million in 2017.  The 57-year-old former footballer is 6 feet 2 inches (1.88m). His current source of income is his job as a football analyzer on CBS. Allen's career as a successful footballer is the source for most of his net worth.

On 26th June 1993, Marcus Allen married the cast of The Real Housewives of Beverly Hills, Kathryn Edwards but divorced in 2001.

Marcus Allen's only child was born on 5th January 2014 to Lauren Hunter named, Drake Connor Allen when they were in the relationship.