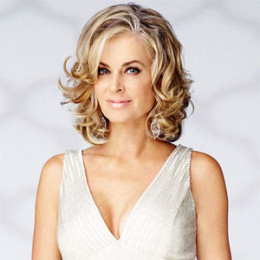 Eileen Davidson, the winner of Daytime Emmy Award for the series, Days of Our Lives, is an American actress, a reality star, and an author. Before being an actress, she modeled for various commercials. Among all her works, she is especially known from the television soap opera, The Young and the Restless and another daytime soap opera, Days of Our lives for which she was nominated for various awards. Apart from this, she has been married thrice and has a child.

Davison holds White ethnicity and is an American citizenship holder. She studied at Corona del Mar High School and then enrolled at Staircase Theater for acting classes.

Before beginning a career in acting, Eileen Davidson appeared as a model in Mexico City and California working in various commercials and print works. After several months of modeling, she gave auditions for The Young and the Restless, an American TV soap opera for the role of Ashley Abbott.

Beating more than 100 candidates, she was selected for the role and appeared on the show alongside Eric Breaden, Melody Thomas Scott, Joshua Morrow, Sharon Case, Peter Bergman and Amelia Heinle among. From 1982 till present, she is working on the same series and has even won nominations for various awards for her performance.

In the same year, 1982, Davidson featured in the film, Goin’ All the Way! and on the series, The Phoenix. A year later, in 1983, she appeared in the movie, The House on Sorority Row that collected $10.8 million at the box office.

Davidson is especially known for her work on the series, Days of Lives where she shared the screen with Deidre Hall, Kristian Alfonso, Arianne Zucker, Alison Sweeney, Eric Martsolf, Galen Gering and others. She won a Daytime Emmy Award in 2014 after being nominated for several other awards.

From 2014 till 2017, she has also been a part of The Real Housewives of Beverly Hills, an American reality TV series in the season five alongside Lisa Vanderpump, Kyle Richards, Lisa Rinna, Erika Jayne, Yolanda Hadid, Kim Richards and others.

Apart from acting, Eileen Davidson is also an author. She collaborated with Robert J. Randisi and published novels like Death In Daytime (2008), Dial Emmy For Murder (2009), Diva Las Vegas (2010) and Swinging In the Rain (2011).

The beautiful actress, Davidson married her third husband, Vincent Van Patten in 2003. The couple met for the first time on the sets of The Young and the Restless in 2000 and eventually fell in love. They exchanged their vows on 15th April 2003.

Davidson fell in love with him many years before their marriage, at the time she was married to her former husband, Jon Lindstrom. Patten and Davidson came together after separating from their previous partners. They have now been together for 14 years. There were rumors regarding their divorce in 2015. However, they are still together. The family lives a blissful life with their only child, Jesse.

In 1985, Davidson tied the knot with her first husband, Christopher Mayer, a Manhattan-born American actor. But the relationship lasted only for a year.

She got married for the second time in 1997,  to Jon Lindstrom, an American actor, writer, director, and a musician. They eventually ended things in 2000, probably because Davidson had fallen in love with Vincent Van Patten.

Eileen Davidson has been a part of Hollywood for last 30 years. She is a veteran soap opera actress; she's been a cast member of Days Of Our Lives from 1993 till present and The Young and The Restless from 1982 till present. According to the records, the actors who have passed 10-year mark in soap opera make around $2,000–$5,000 per episode; she is probably paid the similar amount.

Besides, Davidson received a signing amount of $750000 before joining The Real Housewives of Beverly Hills. From all her endeavors, Davidson has an estimated net worth of $3 million.

After her first divorce, she married for the second time with Jon Lindstrom on 3 May 1997. The pair separated in 2000.

On 15 April 2003, Eileen Davidson tied the knot for the third time with an American actor and a former tennis player, Vincent Van Patten after separating from their respective past partners.