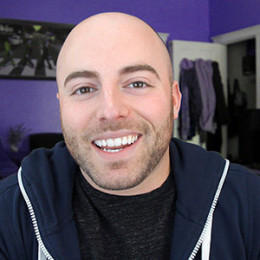 Matthew Santoro is a former accountant and YouTube personality famous for his "50 Amazing Facts” series. He was born in Welland, Ontario and later moved to St. Catharines. Matthew completed his Masters in Accountancy from the Brock University. He grew up as a fan of Drake and the hip-hop music industry. Matthew is active on Youtube through his channel Matthew Santoro and has over 5.38 million subscribers in the main channel except two other sub channels.

Matthew Santoro was born on July 16, 1985, in Cambridge, Ontario, Canada. Later, he moved to Welland and then  St. Catharines. His birth sign is Cancer which defines his personality as emotional and sensitive and cares deeply about matters of the family and their home.

Matthew Santoro first joined YouTube on February 13, 2010, and as of 2019, he has more than 6.3 million subscribers and 1.2 billion views. He is mostly known for uploading top 10 infotainment videos with a twist of comedy. In 2015, he moved to  Toronto, Ontario, Canada.

Good morning everyone! No deep introspective quotes or hashtags here, just a wish that you have the best day of your life full of health and love! Have an amazing day! : @carmenxdanielle

Santoro worked as an accountant after his graduation but in 2012 he left his job to pursue his career in YouTube as a full-time YouTuber. He also featured in  CinemaSins' Everything Wrong With... series as a special guest narrator. He also collaborated with Lilly Singh, Olga Kay, Toby Turner, and Arnold Schwarzenegger and others in Terminator Genisys: The YouTube Chronicles.

Matthew Santoro is possibly single at the moment, previously in 2016, he uploaded a video titled My Abuse Story where he talked about an unnamed romantic partner who psychologically and physically abused him during their relationship. He said, the video was intended to be private, but that he had made it public accidentally.

While Santoro never mentioned the name of his abusive partner, his friend Rob Gavagan claimed that the unnamed lady mentioned in the video was comedian Nicole Arbour.

For further details enjoy the video that  follows:

Santoro is a huge fan of Drake and hip-hop culture, Santoro often refers to Toronto as "The 6ix". In January 2017, he moved to Los Angeles and possesses a U.S. green card but maintains Canadian citizenship.

He released a video on 21 October 2017 where he mentioned that he suffers from clinical depression.