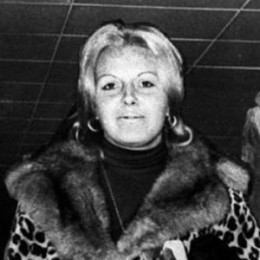 Melinda Trenchard was married to the famous American singer Tom Jones aka Sir Thomas John Woodward OBE. The couple were together in a marital relationship for almost six decades and shared a good bond until she was alive. However, the marriage of Melinda and her famous musician husband was filled with ups and downs with Jones' consistent infidelity.

Trenchard and her husband were love birds since there childhood. Both of them were only 12 when they first met. Tom in an interview with the BBC described how he used to watch Melinda pass his window with friends when he was suffering from tuberculosis. He used to wonder about holding his future wife after getting out of his sickness.

The duo started dating eventually. At the beginning of their affair, they used to meet at a phone box at Sir Tom's street in Treforest. On 2nd March 1957, the couple tied the wedding knot at the young age of 15 in the Pontypridd, Wales attended by their close friends and families.

The duo shared one son together named Mark Woodward who was born in the same year of their marriage in 1957. Mark now works as the manager of his father. Besides, Tom in his autobiography explained that the duo wanted to have more child but the miscarriage made Melinda infertile.

When Melinda was alive, she proved that she was a loving wife as she stood by her spouse's side even when Tom was involved in various extra-marital affairs. Tom slept with up to 250 ladies just in one year and he even admitted having a son named Jonathan Berkery with model Katherine Berkery while he was in a three-day flying with the model.

Melinda Trenchard was suffering from lung issues throughout her late 60's. The sad truth came out when she discovered lung cancer. Moreover, she spent her last days at the Cedars Sinai hospital suffering to live and she left the world on 10 April 2016.

Following her death, Tom was rumored to be dating actress, Priscilla Presley. Later, Priscilla confirmed that they were not more than friends. Addressing the speculations at that time, Priscilla said, "Tom and I have been friends since 68. They were seen strolling around Hollywood city from 2017. Despite being 79-year-old, he still fancies with younger women.

Tom Jones, late. Melinda Trenchard's spouse is known for his real hit with the ladies. He married Melinda at age of 16 but is known to have romantically linked to a number of women while pursuing his career. They were born just streets apart in Pontypridd, South Wales. They shared a son, Mark who arrived just a month after their wedding.

When Tom has going through a tough time after Linda's death, Priscall has been an amazing support for him. Tom and Linda remained in a conjugal relationship for 59 years until her last breathe.

Post the demise of Trenchard, Jones lives in a flat in London. He sold the couple's LA mansion and switched back to the UK. In 2020, Jones is probably single.

Followed by Melinda Trenchard's death, Jones was reported to be in a romantic relationship with Elvis Presley's ex-wife Priscilla Presley. Jones was rumored of dating Priscila Preskey in 2017 but he is a world a way from the superstar studs she's usually drawn to.

The two dating rumors emerged after they were spotted dining together at Craig's restaurant in Hollywood in January 2017 arriving in white Rolls Royce. Even though there was a spark between the two they weren't ready to confirm it infront of the media.

However, during an interview with The Sun, Tom Jones denied saying they were just friends by stating "we have been friends for a long time. She's a lovely lady. We do enjoy our nights out together." They have known each other from 1970s amid her marriage to Elvis from 1967 to 1973.

What was the Net Worth of Melinda Trenchard?

Melinda Trenchard was with her partner from her teenage and both of them shared their net worth. The estimated net worth of Tom is $300 million all thanks to his singing career.

The couple owned a number of properties in the States and in the UK as well. Tom recently sold his house of LA where he used to live with his wife for 20 years in $7.3 million. Similarly, he also sold his country house in $4.5 million to a football fan couple who won a lottery.

Melinda's spouse Tom is a big fan of the sports car and owns a collection of cars which includes:

However, after Melinda's death, Tom moved back to the UK and left the couple's home in Los Angeles. Not to mention, Melinda had even suggested the musician to live in a flat instead of a house or a mansion. Besides, Jones is also actively working as a performer and continues to tour with his band.

Melinda Trenchard was born in January of 1941 in United Kindom. She was a private person and kept her educational background and early life to herself.

Melinda Trenchard and Her husband Tom Jones in their early 30's. SOURCE: The Sun

The celebrity wife was an ordinary name before marrying Tom. She came to the spotlight after she was linked to her husband.

Melinda Trenchard was married to the famous American singer Tom Jones.  The couple were together in a marital relationship for almost six decades and were sharing a good bond.

Melinda Trenchard and Tom Jones shared one son together named Mark Woodward who was born in the same year of their marriage in 1957.