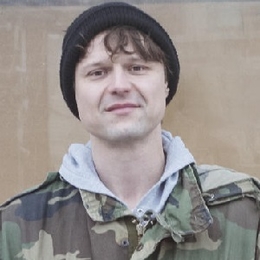 Juno Award for Album Artwork of the Year nominee, Menno Versteeg is a Canadian musical artist. Since 2007, he is a member of the music group Hollerado. His music group has released songs including Americanarama, Got to Lose, and so on. Apart from his music career, he is also popular among people for being the husband of a Canadian actress Annie Murphy.

Maintains A Lowkey Despite Being A Married Man

A member of a music group Hollerado, Menno Versteeg, has a blissful married life along with a successful career. He is in a marital relationship with his beloved wife, Annie Murphy, a Canadian actress famous for her role as socialite Alexis Rose in the comedy TV series Schitt's Creek. 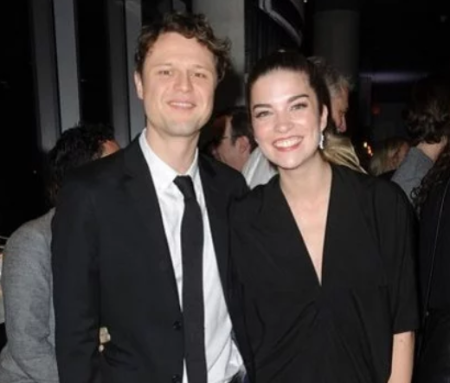 Versteeg and Annie exchanged the vows on 11th August 2011. The ceremony was a private one that took place in front of their close friends and family. Ever since their wedding, the pair are living happily without being part of unwanted rumors and controversies.

They occasionally share photos of one another on their social accounts. On 21st August 2018, both of them wished each other on the occasion of their 7th wedding anniversary via respective social accounts by sharing lovely photos. 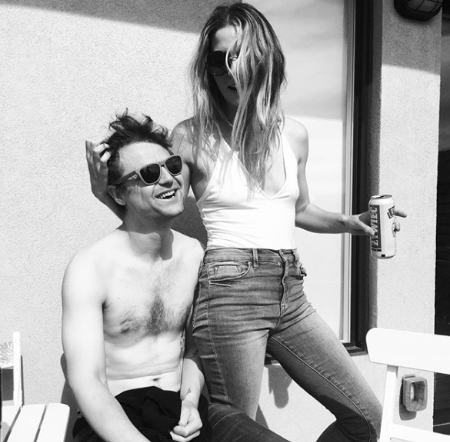 On the caption, Versteeg wrote;

"Hey @annefrances did u realize that 7 yearz ago today we got married for realz? Just did a quick www search and WHAT THIS MEANZ IS COPPER AND WOOL!!! Moscow Mulez and Mittenz LOLOLOLOL!!!!? No but for realz thanks for being kind and compassionate and just the coolest and leaving a trail of good vibez everywhere you go. And for being the only person who will chucklez at this pozt."

Even though the couple is already married, they are quite secretive and mostly keeps the details behind the curtains. Unlike other celebrities, they prefer lowkey media and rarely talk much about their relationship to the media. 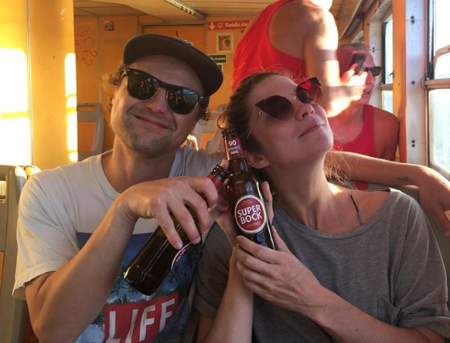 Despite being busy on their respective professions, the duo always gives priority to their relationship. They always manage to spend quality time with each other.

The musical artist and his partner in crime are in a conjugal relaitonship for over eight years, but still, they are maintaining a peaceful relationship. Yet, the rumors about their divorce and extramarital affair are not surfaced on the internet. 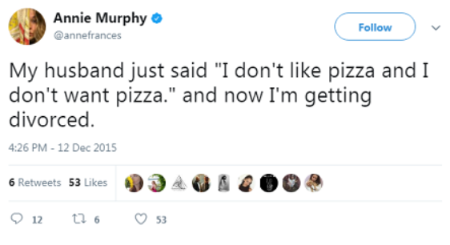 Menno Versteeg jokingly said that she was about to get divorced SOURCE: Twitter (@annefrances)

However, back on 13th December 2015, Schitt's Creek cast, Annie Murphy, said via a tweet that she was about to divorce her husband. Nevertheless, it was just a joke, and the matter was about food preference. She wrote;

My husband just had said "I don't like pizza and I don't want pizza." and now I'm getting divorced.

Moreover, the lovebirds further faced a great loss. Their apartment got caught with a deadly fire.

Menno Versteeg summons a hefty amount of money from his career as a musical artist. Along with the musical group, Hollerado, he has released a number of songs and albums.

Although he makes a fruitful income, his net worth is currently under review. Furthermore, his actual annual salary is not disclosed.

His Wife Is A Millionaire!

Annie Murphy is a wealthy actress. She earns a decent sum of money from her prolific career as an actress. She appeared in several hit movies like Picture This, Story of Jen, Lick, etc.

Similarly, she is the regular cast on the series Schitt's Creek alongside Kristin Kreuk and Jay Ryan. Murphy further appeared in other series like The Business, Against the Wall, Rookie Blue, and so on.

For her portrayals in such hit movies and TV series, she probably received good payroll. Her overall net worth is $3 million as of 2019.

A Canadian musical artist Menno Versteeg is in a marital relationship with his wife Annie Murphy, a Canadian actress.