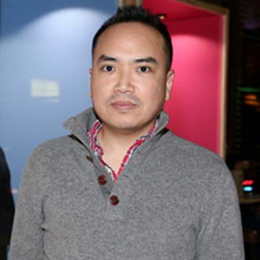 Michael Golamco is an award-winning playwright and screenwriter who is widely known as a regular writer of the American drama television series named "Grimm". He is also famous for writing plays like "Achievers", "The Shadow on the Moon", and "Year Zero". He is promoting his current movie "Always Be My Maybe" scheduled to be released in May 2019 on Netflix.

Michael Golamco is possibly single as of now. The well-known screenwriter is focused on his career and is believed to be out of any dating and marital relationships. Moreover, he is never spotted with any girl publicly.

Golamco is out of any dating rumors and media controversies both regarding his personal and professional life. It seems like the talented screenwriter is waiting for his soul mate.

I am so damn proud of my friend and hero @aliwong! https://t.co/KEy7jWGJxF

As of May 2019, he seems so busy promoting his new movie Always Be My Maybe. Scrolling his current Twitter posts it's so clear that Golamco is so proud of his cast members, especially with Ali Wong.

What is the Net Worth of Michael Golamco? Know about his Salary, Earnings

Michael Golamco's net worth lies somewhere between $300,000-$1 million. Working as a playwright and screenwriter, he certainly made a huge sum. In addition, the average salary of a playwright in the U.S. is $38,000. Similarly, the average pay for the screenwriter is $60,000-$100,000 annually.

Michael worked for many plays in his early career. Firstly, he wrote a full-length play named Achieves in 2001 which was produced by a theater group called Propergander. Since then, he wrote many plays like The Shadow on the Moon, Cowboy vs. Samurai, Year Zero and Build. Besides, he also worked in numerous short plays like Heartbreaker and Please Stand By.

At the #AlwaysBeMyMaybe premiere chillin with my friends/heroes @randallpark @hieunho. Feels like a new chapter began last night. Something is imminent

As for his film career, he wrote the screenplay for many films like Dragon of Love, The Achievers, Please Stand By. Meanwhile, he is currently working as a screenplay co-writer for upcoming films like Always Be My Maybe and Akira. Netflix's "Always Be MyMaybe" casting Ali Wong, Randall Park, Daniel Dae Kim, and Keanu Reeves is scheduled to be released on 31st May 2019

The screenwriter is currently a staff writer for American fantasy police procedural drama television series named Grimm. Following that, he has written the teleplays for the episodes including You Don't Know Jack, Hibernaculum, Cry Luison, and El Cucuy. Furthermore, he also worked as a story editor on episodes 2-16 of season 4 in the same television series.