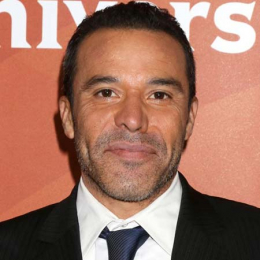 Michael Irby is a popular Hollywood actor better known for portraying the role of Charles Grey in the television series named The Unit. He is also famous for working in some of the biggest blockbuster movies over the decade like Taken, Fast Five, The Last Castle, Bolden! and many more. The 46-years-old actor is also famous working appearing in the television series including CSI series, NCIS series, Law & Order series.

Personal Life of Michael Irby; Is he Married?

Michael Irby is currently married to long term girlfriend Susan Matus. The couple shares a good bond and is together for over a decade. Moreover, the duo is celebrating their fourteen years of a marital relationship.

The pair first met while studying in the school in New York. Since then, they started dating and finally took the big step and shared wedding vows in front of their close friends and relatives in 2005 after dating for several years.

The pair is a blessed parent of their son named Adison James Bear Irby. The duo seems concerned about their son as they do not share any information regarding their children.

Michael is currently focused on his acting career and is not involved in any rumors and controversies. Additionally, he is spending the days happily with the love of his life and the relationship between the pair seems smooth as there is no sign of divorce between them.

What is the Net Worth of Michael Irby?

Irby started his acting career in the Hollywood industry by working in the 1997 film named Silent Prey. Since then, the famous actor appeared and starred in many movies including, Mourning Glory, The Last Castle, Bolden,l Lie to Me, Fast Five, Taken and more. Among all his movies, Fast Five was blockbuster and collected over $726.1 million on the box office against the budget of $125 million.

#Bishop has a lot on his shoulders. #rollout with #mayansmc tonight and get one step closer to finding the rat. Thank you @mmcgraphix for this dope #fanart #soa #elpresidente #espinozasleather #glendaleharley @mayansfx

On the other hand, Irby was a soccer lover from his early life. In fact, he used to play in Europe as part of the Team USA. But, unfortunately, he got injured and was forced to stop playing football.

Michael Irby is currently married to long term girlfriend Susan Matus. The couple shares a good bond and is together for over a decade. Moreover, the duo is celebrating their fourteen years of a marital relationship.

Michael Irby and his wife Susan are the blessed parents of their son named Adison James Bear Irby.