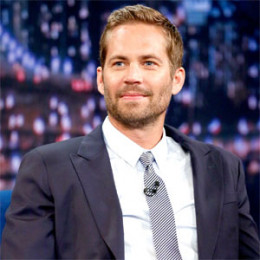 American actor, Paul Walker was best known for portraying the character of Brian O'Conner in 'The Fast and Furious' franchise. He started his career as a child artist but he gained public attention in 1991 through the teen movies like 'She's All That' and 'Varsity Blues.' In 2001, he was awarded Hollywood Breakthrough Award for New Male Stylemaker for his breakthrough performance in 'The Fast and the Furious'.

Walker had a daughter, Meadow Rain Walker with his one-time girlfriend Rebecca McBrain. He died at the age of 40 on November 30, 2013, in the car accident along with his friend, Roger Rodas.

Paul Walker was born on September 12, 1973, in Glendale, California to Cheryl (née Crabtree), a fashion model, and Paul William Walker III, a sewer contractor, and boxer. He was American and belonged to White ethnicity but his ancestry was mostly English, with some German, Swiss, and Irish.

Walker was the eldest child of his parents among his five siblings. He joined the high school in the  San Fernando Valley and completed his graduation in 1991 from 'Sun Valley's Village Christian School'.

After completion of his high school, Walker attended many community colleges in Southern California and did majors in marine biology. He was a member of The Church of Jesus Christ of Latter-day Saints.

Paul Walker began his career as a child artist as he starred in the TV commercials for Pampers and later began modeling. He made his silver screen debut in 1985 with the movie, Monster in the Closet.

Later, he appeared in various movies and TV series like  The Retaliator, The Young and the Restless,  Pleasantville, She's All That, The Skulls.

However, his breakthrough performance in action film The Fast and the Furious helped him to gain popularity among the international audience as well as signing the movie rocketed his career. He appeared in 6 movies out of the seven series of Fast and the Furious before his death.

He was awarded MTV Movie Award twice and both time he shared his award with his co-star, Vin Diesel. In 2015, Teen Choice Awards honored him with Choice Movie Actor: Action, after he passed away, so his fellow star collected the award on his behalf.

Paul Walker was dating Jasmine Pilchard-Gosnell during the time of his death. Previously, he had an affair with Rebecca Soteros with whom he shared a daughter, Meadow Rain Walker. Meadow lived with her mother for 13 years in Hawaii and later she moved to California to live with her father.

Walker shared a good bonding with his co-star, Vin Diesel who is the godfather of his daughter. Walker tattooed his daughter's name, Meadow Walker inside of his right wrist along with the Hawaiian state flower.

Walker was also associated with many social causes. In March 2010, he offered to help the people of Constitución, Chile who were injured in the 8.8 magnitude earthquake. Later, Constitución people decided to show their gratitude gesture to Walker by naming the main street of a new neighborhood in the town as "Paul Walker street".

Walker is also known as the car enthusiast as he competed in the Redline Time Attack and he raced on M3 E92 as well as he worked with the AE Performance Team.

In 2001, Paul Walker was chosen as one of the 50 Most Beautiful Persons in the world by People magazine. He had visited different countries such as India, Fiji, and Costa Rica.

Paul Walker left the world at the age of 40 in a tragic car accident on November 30, 2013. Walker and his friend, Roger met with an accident while they were heading for an event for Walker's charity Reach Out Worldwide for victims of Typhoon Haiyan (Yolanda). He was in the passenger seat of a car while Roger was driving, the car crashed into a concrete lamp post and caught fire.

Walker died because of the combined effects of trauma and burns whereas his friend died of multiple trauma. As per the report, their bodies were burned in such a way that it was beyond recognition.

The spot where they died is a popular spot for drifting cars. Police found the main reason behind their accident was due to the car's speed because no alcohol or other drugs were found in either of their body neither any mechanical failure nor road conditions appeared.

At the time of his death, Walker finished the Brick Mansions and Fast & Furious 7 was in the middle of its shooting. So, his body double was used in the movie. Numbers of his co-star and Hollywood celebrities expressed their tributes to Walker through social media.

Walker's dead body was cremated and his ashes were buried at Forest Lawn Memorial Park in a non-denominational ceremony. His father and daughter filed a case against Automobile company, Porsche but later they reached an agreement with Porsche.

Paul Walker had an estimated net worth of $25 million as of 2014. He was paid only $1 million for the first two Fast & Furious movies but for the 3rd franchise, his salary was upped to $7 million. Reportedly, he charged $15 million for both Fast Five and Fast & Furious 6.

Meadow Rain Walker is the only daughter of Paul Walker. She is the goddaughter of Vin Diesel.