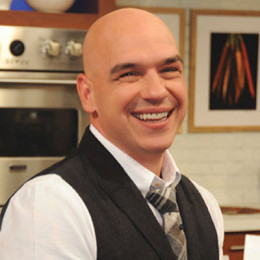 Michael Symon is a James Beard Foundation Award-winning American chef, restaurateur, television personality and an author; he is a very recognized and famous name in the cookery world. He is a regular face on American cookery shows and has contributed to several shows. He owns several famous restaurants around the Cleveland area. He is one of the renowned chefs in America and owner of several reputed restaurants.

An Award-winner chef Michael Symon was born on September 19, 1969, in Cleveland, Ohio. He holds the American nationality and belongs to the white ethnicity.

James completed his schooling in 1987 from St. Edward High School. After that, he joined Geppetto's Pizza and Ribs on Warren Rd. as a part-time job holder.

He graduated from the Culinary Institute of America in Hyde Park, New York in 1990.

Following his graduation, in 1993 he moved to Piccolo Mondo founded a small yet devoted restaurant.

In February 1997, Michael along with his wife Liz Shanahan opened a restaurant Lola in Cleveland's.

On 15th April 2006, he opened his third restaurant named 'Parea' and after that, he succeeds to establish more restaurants.

After their successful career in hotels and hospitality, he was motivated in Television. On 3rd November 2009,  he promoted the Food Network's video game entitled 'Cook Or Be Cooked for Nintendo Wii'.

As well as he worked in the "Cleveland, OH". In September 2011, he began co-hosting the ABC show entitled 'The Chew'.On 24th September 2013, ABC launches his book named Chew: What's for Dinner'.

In 2008, Michael Symon began working as a "spoken chef," representing cookware companies such as Vitamix and Calphalon also appearing at housewares shows and other demonstration events.

As of now, Michael Symon won many awards in his career. In 1995, The Plain Dealer Sunday Magazine named him as a Cleveland's Hottest Chef.

In 2009,  James Beard Foundation Award him as a "Best Chef Great Lakes". He is also the three-time winner of Food Network South Beach Wine and Food Festival Best Burger Award years including 2010, 2011 and  2012.

In 2015 he won  Daytime Emmy Award in a category of  Outstanding Informative Talk Show Host.

The 49 years old Emmy winner chef, Michael Symon earns huge amount of money over his career and his estimated net worth is $4 million.

Michael is a married man. In 1994, he got married to beautiful Liz Shanahan who is his business partner and chef too.

The couple first met during the collaboration of Liz Shanahan and after five years of togetherness duo admit their love for one another.

The duo doesn't have their own children but they have a son named Kyle Symon, from Liz's past marriage. It was believed Kyle was two years old when the couple first met.

The duo is together for more than two decades ago and there aren't any rumors regarding their split and divorce.

There is no information available on her except that he met Liz when her child was 2 years old. They started dating afterwards and later got married. They don't have their child together yet.

Kyle is the step son of Michael Symon and he is two years old when his parents got married.