Home Article Know about the married life of Michael Symon and Liz Shanahan. How does the couple first met?

Know about the married life of Michael Symon and Liz Shanahan. How does the couple first met? 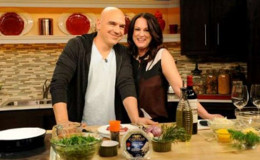 They say "Food is love". It's true as food brings all our loved ones together. This is the secret of popular Celebrity Chef Michael Symon and his sommelier wife Liz Shanahan's happy married life. The couple has given completely new meaning to the word 'marriage' sharing similar interests and passion for food as well as love.

In this section, we will reveal all the secrets ingredients of this couple's happily married life recipe. So, let's begin!

Married life of Michael and Liz: An Incredible Journey of their life

Michael Symon, who is an award-winning American chef, restaurateur, television personality and an author, is a happily married man with his lovely wife, Liz Shanahan.

They have been together for more than two decades which is a proud thing for a couple to have such bond and understanding.

They officially tied the knot in the year 1994 and have cherished each other since then. Michael quotes:

"You Cook Together, You Stay Together"

They have been cooking together for a very long time and they believe their passion for cooking and making people happy by preparing food has brought them together and are still on their way miles ahead in life.

no matter how much @sonsofanarchy u watch together it is never a good idea to call ur wife a old lady!!

Rumors regarding their divorce or affairs are out of the question, so they really have inspired every couple out there to have passion in everything we do, including love.

Love that ignited in the kitchen: How they met

Before they started dating, Liz was the collaborator on his restaurant. On an interview for Good Housekeeping.com, Michael confessed about their relationship and told sources that Liz was always his favorite company and they used to spend a lot of time together.

He further added that it took five years for him to make her go on a date and they got together really well. After a few years of dating, they finally got engaged and later on officially tied the knot.

Michael always considers Liz as his source of inspiration and motivation.

The couple started their career together by opening a restaurant in February 1997 and named Lola in Cleveland's trendy Tremont neighborhood.

Both worked really hard for the restaurant to earn a good name which they did too as Lola was named as one of America's Best Restaurants in Gourmet Magazine.

After a successful food journey, they renamed Lola as Lolita and reopened Lola in downtown Cleaveland. Since then, they have continued their incredible journey of food as well as Life together.

#throwback opening of @lolabistro 1997 our first write up pic! @lizsymon ...what a run it has been!

Symon, who also owns Mabel's BBQ and Burger franchise The B-spot, when married Liz, she already had a son, Kyle from her previous marriage who is now all grown up and learning to be a professional musician.

Despite such a long time of being together, the duo does not have a child of their own and this has certainly not created any problem in their marriage.

You May Like: Chef Vikas Khanna has not been married yet: Dating rumors with model Padma Lakshmi

Michael has always considered Kyle as his own son and shared that he has taught him a lot of things including cooking, playing music and so on.

He was always there for him as a father and always has dinner with him every night.

When not working, Michael is a full-time family man!!

As soon as he gets off from his work, he rushes home to meet his family and spend all the time he's got with them.

Michael loves cooking for his family, playing golf, riding bikes, gardening backyard and loving his wife and son. He also loves posting all the cute family activities they do in their official Instagram sites.

What more could a woman ask for? He is the perfect husband and a loving father. He also spends time with their bull mastiff, Ruby and Old English bulldog, Ozzy.