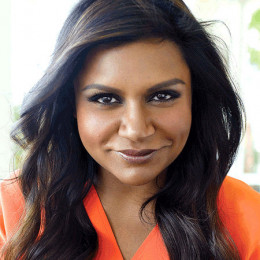 Vera Mindy Chokalingam aka "Mindy Kaling", is an actress, producer, comedian, and writer, known as the creator, executive producer, and star of the Fox and Hulu sitcom The Mindy Project. In 2013, she was named One of 100 Most Influential People in the World by Time Magazine. She is the daughter of Avu Chokalingam, an architect and Dr. Swati Chokalingam, an obstetrician/gynecologist. She is a Hindu.

Accounting her personal life, she hasn't married anyone. She clearly stated that she does not wants to get married now, but she loves to have some children.

Sundance brought the lewks, the crew, and the fun. Thanks to our cast and my ride-or-die team (you know who you are!) who helped make all of this possible. #LateNightTheMovie #Sundance2019

In her past days, she had dated several men but with them she didn't make it too far. Currently, she is single and lives in West Hollywood, California. Till now she hasn't been a part of any controversial issues.

She gave birth to her first baby girl Katherine Kaling on 15 December 2017. She has not revealed the identity of her baby's father.

Kaling has amassed a net worth of about $24 million as of February 2019.

Her parents are from India. Her parents emigrated to the United States.

She received the honorary degree of Doctor of Humane Letters from Dartmouth College in Hanover, New Hampshire on 10 June 2018.