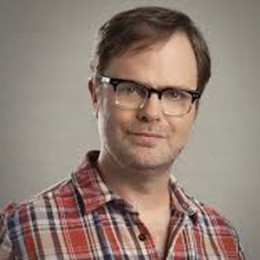 Rainn Dietrich Wilson, better known as Rainn Wilson, is an American actor better known for his role in the comedy TV series, The Officer, aired on NBC TV. He also won Screen Actor Guild Award and a nomination for Primetime Emmy Awards and Screen Actor Guide Awards for his outstanding performance in the TV series. He is also a writer, director, producer, and activist. Some of his successful hit movies are The Boy, House of 1000 Corpses, Transformers: Revenge of the Fallen and TV series Six Feet Under.

Born on 20th January 1966, Rainn Wilson is a son of Shay Cooper, a yoga teacher, and actress and Robert G. Wilson, a novelist, artist and business consultant. He comes from Norwegian ancestry.

He joined Kellogg Middle School and moved to Shorecrest High School in Shoreline, Washington. He passed out with a degree in drama from the University of Washington in 1986. He also enrolled in New York University’s Graduate Acting Program at the Tisch School of the Arts and graduated with MFA in acting.

After completing his acting course, he worked for Public Theater, Ensemble Studio Theater, Playwrights Horizons, The Roundabout and The Guthrie Theater. During the period, he was nominated for three Helen Hayes Awards for his work in Arena Stage.

After working on a small screen, Rainn Wilson made his acting debut in American soap opera, One Life to Live, created by Agnes Nixon, in 1997. The soap opera has about 45 seasons with 11,136 episodes.

In 2009, he made a cameo appearance in Transformers: Revenge of the Fallen as Professor Colan. The movie starred Shia LaBeouf, Megan Fox, Josh Duhamel, Tyrese Gibson and John Turturro in lead role. The movie was one of the highest grossing movie ever which earned $835.3 million worldwide.

He has also founded a website and YouTube channel SoulPancake which has over 1.6 million subscribers and 225 million video views. It was ranked #114 on the 2015 Inc. 500 Fastest-Growing Private Companies in America List. He has also published a non-fiction book The Bassoon King: My Life in Art, Faith, and Idiocy, in November 2015.

Moreover, his three movies were released in 2017: Permanent, Smurfs: The Lost Village and Shimmer Lake. His next flick movie is Meg, directed by Jon Turteltaub, which will be released in 2018. The movie is a science fiction action horror movie starring Jason Statham, Jessica McNamee, Li Bingbing, Ruby Rose, Cliff Curtis, and Robert Taylor.

Rainn is married to Holiday Reinhorn, an American fiction writer. The couple first met in an acting class at the University of Washington.

They married on Kalama River in Washington on 30th June 1995. The husband and wife are blessed with a baby boy, Walter McKenzie Wilson, born in 2004.

Skiing with the love of my life @HolidayReinhorn. She skis like a mountain elf and I ski like a drunk Manatee.

He is involved in different charitable works and helps in fundraising for Mona educational organization. He co-founded Lide Haiti, an educational initiative empowers adolescent girls in rural Haiti.

Meet Diamond. She’s what we call a “foster fail”. Me & @HolidayReinhorn were going to temporarily host her until we found a home for her but we fell in love... She was a “bait dog” - ears cut off & used to rile up the fight dogs. Covered in scars and skinny as a whippet, she now joins our other rescues Pilot and Oona & keeps them on their toes.

Along with his wife and son, he has three pit bulls; Pilot, Diamond, and Oona in his family.

Rainn, 52, has an estimated net worth of $14 million which he earned from a career in acting and some other extra works.

Currently, he lives in a lavish house situated in Agoura Hills which cost around $2 million.

Rainn Wilson is married to Holiday Reinhorn, one of the fiction writer. The husband-wife are happily married and still together. They are blessed with a baby boy, Walter Mckenzie, in 2004.

Born in 2004, Walter Mckeinze is the one and only son of Rainn Wilson and Holiday Reinhorn.