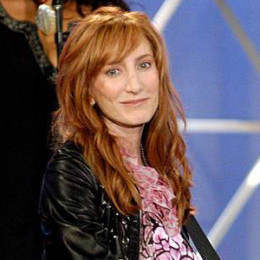 American singer and songwriter, Patti Scialfa began to write songs from an early age of 13. She has been playing for the band E Street Band since the 1980s and succeeded to earn the Rock and Roll Hall of Fame. Scialfa worked with the famous musician, Keith Richards on his first solo album 'Talk is Cheap'.

Patti Scialfa married his boyfriend, Bruce Springsteen on June 8, 1991at their Los Angeles home. The wedding ceremony was attended by his family and close friends. The couple is blessed with three children.

Springsteen is a well-known American singer-songwriter who is best recognized for his work with the E Street Band. They first met in the early 1980s, at the Stone Pony, a New Jersey bar. Soon thereafter, Scialfa and Springsteen began dating and lived together in New Jersey and later moved to Los Angeles.

In the early 1990s, the family returned to New Jersey and is currently living in Colts Neck, New Jersey. They also own homes in many places including Wellington, Florida, Rumson, New Jersey, and Los Angeles.

Scialfa's husband Bruce Springsteen was previously married to actress Julianne Phillips. They tied a knot on 13 May 1985 after dating for a few months. Furthermore, it is reported Bruce is eleven years elder than Philips.

In the spring of 1988, Sprinsteen and Phillips called it quits,  but filed for divorce on 30 August 1988 and finalized in March 1989. Amid, three years of the intimate relationship the duo didn't have any children. Believe it or not, Julia came to limelight after Bruce married her.

How Much is Patti Scialfa's Net worth?

According to the richest, Bruce has a net worth of $345 million. Bruce had a successful career and made tremendous earning.

Patti Scialfa was very passionate about music and started writing lyrics since her childhood days. She worked as a busker and waitress in Greenwich Village after graduating. Later, she formed a street group known as Trickster along with Lisa Lowell and Soozie Tyrell.

Scialfa struggled for many years to make her way in the songwriting and recording industry in New York and New Jersey. She later played at Folk City and Kenny's Castaways in Greenwich Village and Asbury Park's The Stone Pony.

Scialfa joined the E Street Band in 1984. She first performed in The Born in the U.S.A. Tour after joining the band. She also appeared in the British rock band, Rolling Stones' album, ‘Dirty Work’ in 1986. Scialfa then worked with a famous musician, Keith Richard's first album 'Talk is Cheap'.

In 1993, Scialfa launched her first solo album 'Rumble Doll' in 1993. It contained twelve tracks, including popular singles such as 'Spanish Dancer' and 'In My Imagination.'

In 2007, Scialfa released her third album 'Play It as It Lays' which stood at number 90 on the US Billboard 200 chart. It got three and a half stars from the Rolling Stone Magazine.

Patti Scialfa was born as Vivienne Patricia Scialfa on 29th July 1953 in Deal, New Jersey, the United States to Patricia Scialfa and Joseph Scialfa. Her father owned a TV store and later became a real estate developer. Her father was of Sicilian ancestry and her mother is from Belfast, Northern Ireland.

He grew up in Deal, New Jersey. She belongs to mixed ethnicity and holds an American nationality. Scialfa attended the Asbury Park High School and graduated in 1971. She also earned a degree from New York University.

After that, she went to the University of Miami's jazz conservatory at Frost School of Music. During her college days, Scialfa submitted original material to other artists in the hope to be recorded but none of her songs were recorded.

On 25th July 1990, she gave birth to their first child, Evan James Springsteen.

On 30th December 1991, they gave birth to their second child, Jessica Rae Springsteen is an American show jumping champion rider.