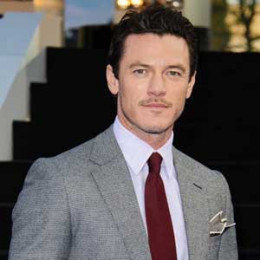 Luke George Evans now known as Luke Evans was born on 15 April 1979 in Pontypool, Wales, UK. He grew up in Aberbargoed, a small town in the Rhymney Valley, Wales as the only child of Yvonne Evans and David Evans. He holds British nationality and belongs to Welsh ethnicity.

At the age of 17, Luke moved to Cardiff to learn singing under the supervision of Louise Ryan, a notable and acknowledged singing coach. In 1997, Luke attended the London Studio Center and graduated in 2000.

Luke Evans began his acting career performing in many of London's West End productions such as La Cava, Taboo, Rent, Miss Saigon, Avenue Q, and Piaf. In 2008 Evans secured his most significant theater role as Vincent in Small Change Written directed by Peter Gill, performed at the Donmar Warehouse.

For his performance, he was appreciated by film casting directors and US talent agencies and was nominated for the Evening Standard Award for best newcomer.

At the age of thirty, Evans got his first movie portraying the Greek god Apollo in the 2010 remake of Clash of the Titans. He then featured in movies such as Immortals, The Three Musketeers, The Hobbit: An Unexpected Journey.

Luke acted as Owen Shaw in Fast and Furious 6 while his 2014, movie Dracula Untold made him even more famous in Hollywood film industry. Recently, in 2017 he has starred in several movies among which Disney's live-action adaptation Beauty and the Beast is known as one of his hit movies.

His new movies Murder Mystery and Midway is expected to be released at some point in 2019.

Luke Evans is openly gay which he revealed in 2002, in an interview. He said,

"Everybody knew me as a gay man, and in my life in London I never tried to hide it." He also added that by being open he would not have "that skeleton in the closet they can rattle out".

Later in 2014, he confessed his homosexuality with media.

Moments before I got socked in the kisser by a big wet wave! #stylish #panama #thetravellingwelshman

However that same year, the Spanish media reported that he was in a relationship with model Jon Kortajarena but unfortunately their relationship ended in 2016.

Luke Evans is a well established Welsh actor and achieved a lot from his acting career. Evans may have received a good sum from his blockbuster movies.

Currently, he is living a lavish lifestyle. As of 2019, his current estimated net worth is around $6 million.