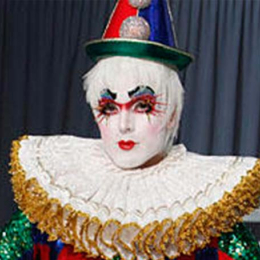 One of the famous American stage performers, John Andrew Quale is known for his singing and songwriting skills with the stage name of Prince Poppycock. He is also famous for participating and finishing at the fourth place in the fifth season of American's Got Talent held in 2010. He is famously known as  "the Adam Lambert of America's Got Talent" and "a male Lady Gaga" among his fans.

Personal Life of Prince Poppycock: Who is he Dating?

Prince Poppycock is possibly single as of now. The well-known stage performer-singer seems focused on his career and shares no time for a dating relationship. Moreover, he is never spotted spending quality moment with someone special.

Prince is out of any rumors and controversies regarding his personal and professional life. Despite being at the age of 40, he is out of relationships and looks like he is fully focused on his singing career.

What is the Net Worth of Prince Poppycock

Prince Poppycock holds an estimated net worth of $300,000. He grabbed that fortune working as a singer in various stage programs and TV shows. In addition, the average salary of a singer is $45,000-$65,000 per year.

Prince started singing in the public for the first time at the age of 11 at Kennedy Center. Later, in December 2001, he joined Chicago synth-pop band Endora as lead singer and songwriter. Later, he went on performing the role of Jesus in the musical The Beastly Bombing, in the LA. He also performed at the La Belle Epoque, with Ann Magnuson at Red Cat.

Poppycock went to compete in the fifth season of the NBC's reality television talent show series American's Got Talent in 2010. The competition features singers, dancers, magicians, comedians and all of the other performances for any age group for the prize of $1 million US.

Take a look at his first performance on the AGT;

The singer performed at the auditions held in New York City on June 8. He performed a slightly personalized version of the Figaro arira. Moreover, the judges were impressed by his performances and he was approved for the next stage of the competition.

He passed all the rounds with ease, competed at the finals of the programme on September 15, 2010. Further, he opened the show while singing a duet with one of his favorite celebrities, singer, and disco superstar Donna Summer. He ended up in fourth place in the competition gathering experiences.

He is  widely known among his fans as  "a male Lady Gaga" and  "the Adam Lambert of America's Got Talent".