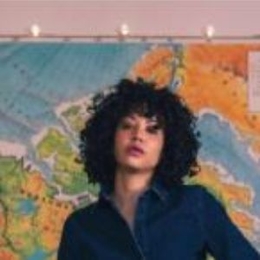 Riann Steele is a New-York born actress who garnered notability as Suzanne in the Netflix show Crazyhead and the role of Finola Jones in the NBC sci-fi series Bebris. The star also performed in Ant-Man and the Wasp, 360, Sket, and Hamlet.

Has Riann Steele Ever Married To Cebo Campbell?

Riann Steele is in a love relationship with none other than Cebo Campbell, the author of her recent series "Debris." She met the love of her life while working for the television series project Debris, in which Cebo was a writer. Both of them publish photos of themselves with their fans on social media. 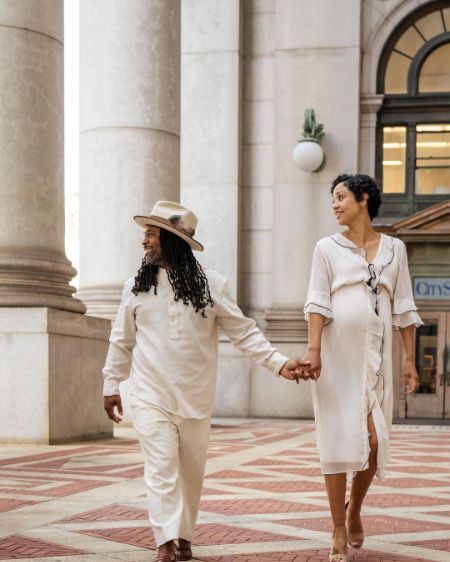 On December 22, 2019, Mrs. Steele shared a romantic black-and-white image with her man on her Instagram. The author doesn't hesitate to post about their bond on his Instagram account. The handsome man posted a series of photos as they held one another's hand while she looked beautiful in her visibly growing tummy.

"I went to Yosemite and bought a T-shirt to wear in Florida so you could like this pic," Riann pointed out that she had put on a new T-shirt with her partner and tagged him in the photo, gazing at the camera. The following picture was a selfie taken wearing a mask, and they fought COVID-19.

In addition, the 35-year-old had found a man who provided her reason to smile during the good and bad times. Everybody is delighted for Rianne, who recently became a new mother, and wishes her in her journey of motherhood. Some sources say Steele and her partner might be planning to marry.

Riann Steele gave birth to two healthy twins earlier than scheduled. 2022 is a hectic year for the Debris actress. She announced the happy news of her pregnancy with twins via Instagram on June 2022. Her first daughter is Margaux Lion and her second baby's name is Juniper Jack. 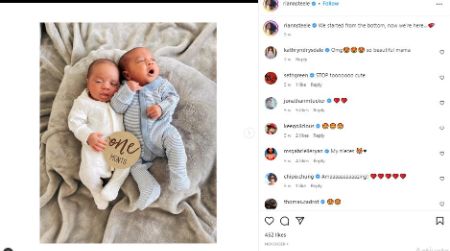 A new mom, Steele, uploaded a photo flaunting her growing baby bump in a red swimsuit. "Just over here creating life... #twins," the actress took to Instagram to announce the happy news.  The comment section was soon filled with good wishes from celebrities, including Thomas Cadrot, Cara Theobold, and Jonathan Tucker.

Later on October 15, 2022, the couple announced giving birth to the twins. In the picture, Riann is hugging one of her babies while kissing its forehead. The family attains properties together and lives a happy lifestyle.

To start a career in the entertainment field, she studied and completed her graduation from UK's well-known art school based in Chiswick. Riann Steele started her career in the United Kingdom and later relocated to the United States to enhance her profession in acting. 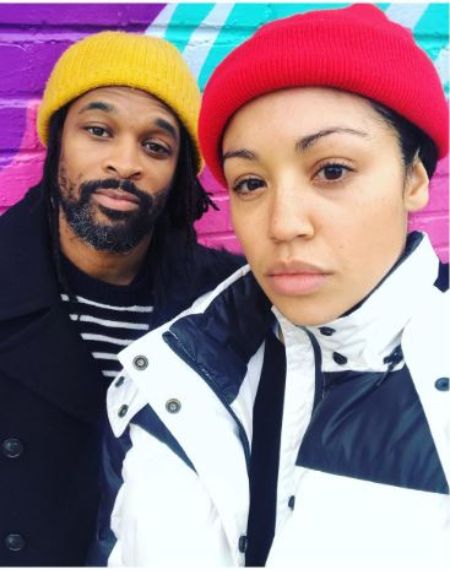 Riann Steele and her partner Cebo Campbell have been together for many years. SOURCE: Instagram(@riannsteele)

Similarly, her first cast was a minor role of a lady in Waiting in the Television film Hamlet, an adaptation of William Shakespeare's Royal Shakespeare Company aired on BBC Two. During her 2009 debut in Hamlet, Riann starred with great English actors like Patrick Stewart and David Tennant.

Simultaneously, in 2010 she was chosen in a Golden Hitchcock award-winning film Treacle Jr. opposite Aiden Gillen. She is also one of the casts of the popular TV series Legacies. The show is the prequel to the 2009 famous TV series The Vampire's Diaries. There she played a character as Ablah, a supernatural species 'Jinni' who grants wishes.

Apart from movies, Riann has been in many TV series where she is also seen in guest appearances, supporting roles, and leading roles. One of her main rolled TV series is Debris, produced in 2021 by Universal Television and Legendary Television and co-produced by J.H Wyman.

What's the Net Worth of Riann Steele?

According to multiple sources, Riann Steele has summoned an estimated net worth of $1.5 million. Her base salary for each episode in the show is $40,000. Her acting career is her primary source of income in several hit movies and television series.

Watch the video of Riann Steele in the interview for the Powder Room premiere.

Moving on, Riann's childhood dream was to become either a doctor or a lawyer; instead, she pursued her career in acting. She remained dedicated to the entertainment industry and is still an element of favored movies and series-producing industries.

Another remarkable lead performance dropped by Riann was in Howard Overman's comedy horror television Netflix series Crazyhead as Suzanne, a palpable role. Another impressive debut of Riann on the Netflix series Lovesick as Cleo.

Not to miss, there is a rumor that she is working on the upcoming project of 2023 Ant-Man Part 3, where the audience can find a star cast like Jim Carrey. Her starred movie, Ant-Man and the Wasp, box-office collection was more than $600 million, and the production budget was $195 million in 2018.

Who is Cebo Campbell?

Cebo Campbell is an American-Brooklyn-based screenplay writer and well-renowned creative director. A professional storyteller has worked in various publications like the Stories Award for Poetry and Linda B. Ross Creative Writing Award.

Also, Cebo is the co-founder of the Spherical agency, which serves to develop creative designs for prestigious hotel brands. An agency named Spherical led a team of designers in the developing world. Talking about Riann's soulmate's wealth, his net worth is approximately $3 million.

Outside of Television, viewers also can find Riann on social media platforms. Despite being a talented actress who receives a colossal level of the limelight, she has a limited number of 6,902 followers on her verified Instagram profile with the username @RiannSteele.

Although, the two occasionally give a glimpse of their blissful love life through her Instagram handles. Steele, in one romantic photo captioned with a long hearty message in which she talked about her tough times.

Keep coming back to Married Wiki for more biographies and news of celebs.

Cebo Campbell is a wonderful and loving partner to Riann Steele and has a prosperous lifestyle, preparing themselves in the coming future.

Juniper Jack is the second child of Riann Steele.