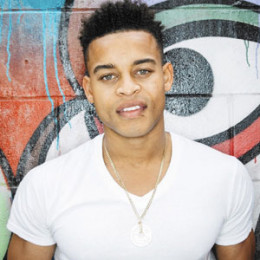 Emmy Award-winning actor Robert Richard is an American actor. He is most recognized for his role in Coach Carter, One on One and House of Wax.

Robert Ri'chard was born Robert Andrew Richard on January 7, 1983. He was born and raised in Los Angeles, California by his mother Beverly and father Jack. He belongs to the African-American ethnicity of Louisiana Creole descent.

Richard went to Palms middle school for his high school education. He then attended Loyola Marymount University in Los Angeles, California. Robert was a sport enthusiastic at a very early age. He still loves to play baseball, basketball, and football.

Robert made his film debut with a guest appearance on the TV sitcom Hangin at the age of 13. He then got an opportunity to play in the shows like Touched by an Angel, and Nash Bridges.

Richard was then featured in the Hallmark/Showtime movie In His Father’s Shoes with the lead role in 1997. It was his mesmerizing performance in the movie which got him 1998 Daytime Emmy Award for Outstanding Performer in a Children’s Special.

Afterward, Robert starred in Nickelodeon sitcom Cousin Skeeter followed by several TV movies like Once and Again, Boston Public and many others. He made his film debut with Light It Up in 1999 alongside Forest Whitaker and Rosario Dawson. His fame prominently rose up with his appearance on Coach Carter and House of Wax in 2005.

In 2011 Richard was cast in the popular TV series The Vampire Diaries portraying the role of Jamie alongside Nina Dobrev.

The 36-year-old actor Robert is currently enjoying his single life. Previously he dated Hollywood divas like Kyla Pratt and Vivica A. Fox.

The gorgeous actress Kyla and Robert met on the sets of UPN TV series One On One in 2002. They started dating in 2003. However, their affair ended in 2004.

After breaking up with Kyla, Richard had an affair with his co-star Vivica A. Fox. They met on the sets of Chocolate City. Robert is almost 20 years younger than Vivica, but despite their age difference the duo fell in love and started dating in 2014. Their relationship as girlfriend-boyfriend eventually ended after a year in 2015.

Robert makes a decent amount from his career. His main source of income is acting. His estimated net worth of 2019 is $400 thousand.