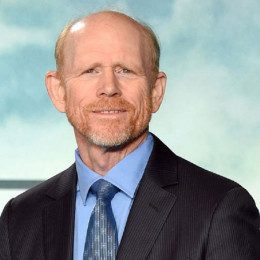 Ron Howard is an American actor and filmmaker known for his mesmerizing work in the film industry. He got the popularity as a child actor when he performed in The Andy Griffith Show and Happy Days. He has directed hit movies such as Cocoon, Apollo 13, A Beautiful Mind and The Da Vinci Code.

Ron Howard was born Ronald William Howard on March 1, 1954, to actress Jean Speegle Howard and actor Rance Howard in Duncan, Oklahoma. He is of mixed descent.

Howard attended John Burroughs High School and tutored at Desilu Studios. He is a drop-out of the University of Southern California’s School of Cinematic Arts.

Howard is an accomplished actor and filmmaker. Brought up in the razzle and dazzle of acting he was involved in acting when he was only 18 months. He also grew interested in directing from a very early age.

He began his acting career with Frontier Woman in 1956. He made his stage debut when he was 2 in The Seven Year Itch. He played in 1959 film The Journey starring Deborah Kerr and Jason Robards. His appearance in The Andy Griffith Show in 1960 raised his fame as a child artist.

He featured in George Lucas’s American Graffiti in 1973. He made an appearance in print ad for Milk- Where’s your mustache? in 1997. He then played in TV series such as Love, American Style, Happy Days. Afterward, he was cast in the movie The Shootist alongside John Wayne.

He gained fame when he portrayed the role Opie Taylor in TV movie Return to Mayberry in 1986. In 1992 he made his appearance in Happy Days Reunion Special, a retrospective hosted by Winkler on ABC and in 2005 The Happy 30th anniversary Reunion.

He made his directorial venture in 1977 with Grand Theft Auto. He then directed an array of high visibility movies such as Night Shift in 1982, Splash, Cocoon, Willow, Parenthood, Apollo 13, A Beautiful Mind, Cinderella Man, The Da Vinci Code, Inferno and many others.

Ron won Academy Award for Best Director for A Beautiful Mind,  and Best Director of the Year award from DGA for Apollo 13 in 1995. In 2008, he showcased the world premiere of his film Frost/Nixon in London Film Festival.

He received Extraordinary Contribution to Filmmaking Award at Austin’s Film Festival 2009. Apart from that he also appeared in Jamie Foxx music video Blame It. He took over directing duties on the Untitled Han Solo in 2017.

Ron is the co-chairman of Imagine Entertainment, a film and television production company along with Brian Grazer.

The 65-year-old Howard is a married man. He tied the knot to Cheryl Alley on June 7, 1975. Alley is a writer by profession. The husband and wife have four children namely Bryce Dallas Howard, Jocelyn Carlyle, Paige Howard, and Reed Cross. 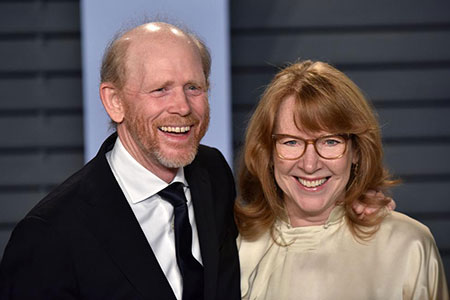 Jocelyn and Paige are twins. The duo is fully committed to their marriage.

Stay tuned to Marriedwiki for more interesting Gossips and Biographies!!!

Cheryl Alley is a lovely wife of Ron Howard. She is a writer by profession. The duo tied the knot in 1975.

Bryce Dallas Howard is the oldest daughter of Ron Howards from his wife Cheryl Alley. She was born in 1981. She is a producer, director, actress, and writer.

Jocelyn Carlyle is one of the twin daughters of Ron Howard and Cheryl Alley. She was born in 1985.

Paige Howard is one of the twin daughters of Ron Howard and Cheryl Alley. She was born in 1985.

Reed Cross is the only son of Cheryl Alley and Ron Howard. He is the youngest child of the couple. He was born in 1987.

Reed Cross is the only son of Cheryl Alley and Ron Howard. He is the youngest child of the couple. He was born in 1987.