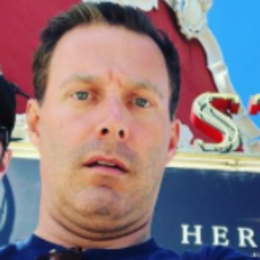 Sam Boxleitner is an American actor, writer-director, and musician. Fans also love him for being the son of science fiction writer and actor Bruce Boxleitner. Let's examine Sam's personal life, lifestyle net worth, and more in detail.

The talented actor Sam Boxleitner is blissfully married to his long-term girlfriend turned wife Andrea Steele Boxleitner. According to Boxleitner, he and Andrea were best friends before they took their friendship and eventually their relationship to the next level. Not to mention, Sam has been romantically linked to now-wife Andrea Steele since the 2010s. 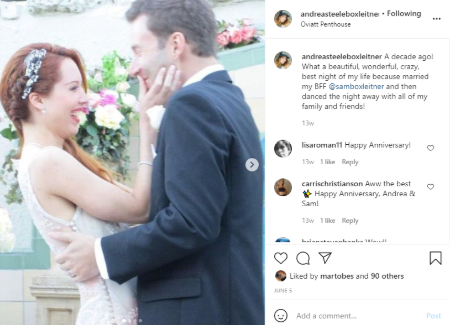 Sam Boxleitner and Andrea Steele have been married for ten years. SOURCE: Instagram

The pair tied the knot on June 5, 2010, in a lavish ceremony at Oviatt Penthouse. Around 50-100 guests, including close friends and family members, attended the wedding of Sam and Andrea. Andrea was stunned in a custom-made bridal gown while her groom, Sam, wore a black and white tuxedo. 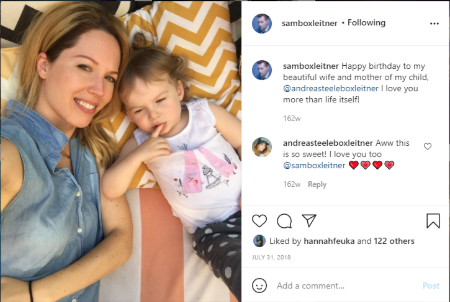 On June 5, 2021, the lovebirds celebrated their wedding anniversary wishing each other via Instagram posts. Furthermore, Sam Boxleitner is now a proud father to seven-year-old daughter Lulu Boxleitner. The actor welcomed a daughter named Lulu Boxletner at 2:10 pm on November 28, 2014 with wife Andrea Steele Boxleitner.

Sam Boxleitner grew up in a show business family. Thus, it is obvious he earned massive popularity. Sam Boxleitner, however, took a long and tumultuous tour before landing on a job as a set production assistant.

Following fifteen minutes of being on set, Sam was bitten by the acting bug. Then, he decided to stop at nothing but face the camera. Sam also did not look back ever since. In 2014, Sam and his brother Lee Boxleitner co-produced the short movie "Downstairs."

The movie earned Boxleitner brothers massive popularity and received praise through the horror film festival circuit, including screenings at the largest and longest-running film festival in the United States.

Sam and Lee had been part of the United Kingdom's Dark Scream Film Festival, Screamfest Horror Film Festival, and Eliot Brodsky's Monsterpalooza. Today, Sam Boxleitner possesses an estimated net worth of $1 million through his career as an actor, producer, and actor.

Sam Boxleitner married his best friend, Andrea Steele Boxleitner, in 2010 after dating for several years. They have been together for ten years now.

Lulu Boxleitner is the only child of Sam Boxleitner with his wife Andrea Steele Boxleitner. Lulu is currently 7 years old.