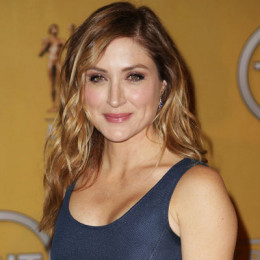 Born as Suzana S. Drobnjakovi from a Serbian mother and an Italian Serbian-born father, Sasha Alexander is a successful name in the television as well as films as an actress. She began acting in her high school and college days. She got her to break in acting from two short-lived series called Presidio and Wasteland. She has graduated from the School of Cinema-Television, University of Southern California. She is popular for her role in Dawson's Creek as Gretchen Witter.

Sasha Alexander was born Suzana S. Drobnjakovic on May 17, 1973, in Los Angeles, California to Dobrila Pavlovich. Both her parents were of Serbian descent.

She started acting during her school days, appearing in her first school production when she was in seventh grade. While in her teens, she was also an ice skater but had to stop after suffering a knee injury. Her interest in acting grew with her age and continued to act in while in high school and college.

Alexander shifted to New York City to act in Shakespeare festivals and summer stock. She is a graduate of the University of Southern California's School of Cinema-Television. There she was also part of Kappa Alpha Theta.

Alexander kickstarted her professional acting career appearing in two short-lived TV series, Presidio Med and Wasteland. She rose to prominence after landing a role of Gretchen Witter in the fourth season of Dawson's Creek. She then played a lesbian character in Greg the Bunny where she also shared an onscreen kiss with Sarah Silverman.

She made her big screen debut in 1997's Visceral Matter and following her first role in the movies she appeared in All Over the Guy, Lucky 13, Misson: Impossible III, Yes Man, Love Happens and The Girl from Nagasaki among others.

In 2015 she played the recurring character of Helene Runyon in Shameless. She shared the screen with William H. Macy, Emmy Rossum, Jeremy Allen White, and Cameron Monaghan among others. Her other TV credits include NCIS, E-Ring, House, Dark Blue, Dinner at Tiffani's and Celebrity Name Game among others. For playing the character Dr. Maura Isles in Rizzoli & Isles, she won People's Choice Awards in 2016.

Sasha Alexander is active in the entertainment industry since 1997 and from her prolific career as an actor, she has collected a decent net worth which is estimated more than $1 million, however, the exact figure is not public.

She played a recurring role in Shameless and according to sources the main cast of the series earned from $500k to $300k whereas the recurring characters were paid $150k to $200k per episode.

Sasha Alexander is a married woman, tied the knot with Edoardo Ponti on August 11, 2007, in Geneva, Switzerland. Ponti is the son of actress Sophia Loren and the late film producer, Carlo Ponti.

Haaaappppyyy Biirrtthhhddayyy to the man that makes us laugh every day! We all you Edoardo!

She has two children with her husband; a daughter Lucia and a son Leonardo. She is living a very happy and peaceful life with her family, balancing and maintaining professional life and personal life. She loves her husband and children very much.

She was previously married to Luka Pece. The pair exchanged vows on September 18, 1999, but their marital relationship was annulled later.

The two were in love relationship before getting married. They have no any children. Their marital life ended soon after with the couple getting divorced.

The two were in love relation for more than three years. They have a child born before their marriage and one after their marriage. They are so much in love with each other and are living very happily and peacefully.

She was born out of the wedlock of her parents but after her birth, they got married. She is so much loved by her parents. She is quite young now and attends a school.

He is the youngest member in the family. He is quite young and attends an elementary school. He is a very adorable and jolly type.