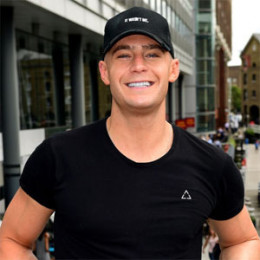 Scott Timlin aka Scotty T is a British reality TV personality. He rose to popularity as a cast member of the MTV reality show, Geordie Shore. He also appeared in several other reality series like Celebrity Big Brother, Ex on the Beach and Neighbours.

Scott Timlin was born on 26th April 1988 in Newcastle, England under then birth sign Taurus. He is British as per nationality, and as far as his ethnicity is concerned, he is Caucasian. His mother, Gill Baxter raised him after she split with his father.

Scotty T started his career in the entertainment industry in 2012. He appeared as a cast member in the reality show, Geordie Shore. He is still working on the show with Gaz Beadle, Charlotte Crosby, Vicky Pattison, Holly Hagan, Ricci Guarnaccio and Elettra Miura Lamborghini.

As of 2018, Scotty T appeared as a presenter in MTV British entertainment reality show, Just Tattoo of Us with Charlotte Crosby and Stephen Bear.

Scotty T is currently unmarried but is in a relationship. He has a secret girlfriend whose identity has not been revealed. The pair met while performing panto over Christmas. He posted a picture together with the caption,

‘’Dunno what I would ever do without this little gem! No matter what I love her so much.’’

The ring emoji on the post became viral. He then passed several statements after being asked several questions regarding his secret girlfriend,

Before this, Scotty T has dated an Instagram sensation, Francesca Toole. In 2016, Toole dumped him after she found him with Kate Price in a hotel. He passed some statement on their on-off relationship,

''With Francesca it was like let’s go out and into town, she was rowdy and she was trying to act like me but I don't need that. I need someone who is the opposite of me. I need someone to bring me down a bit.’’

In February 2017, the couple encountered each other after their miserable break up outside a club. Scotty T was in a relationship with his new girl, Abbie Holborn.

Scott Timlin, 29, has the height of 6 feet 31 inches (1.92m). Timlin, who rose to fame after appearing in Geordie Shore has not yet revealed his exact net worth. He has the net worth of $1 million.

Gaz Beadle, one of his co-star, earns from $48k to $45k from the Geordie Shore. Timlin is also a star of the cast so he earns the amount close to that. He is also a winner of Celebrity Big Brother from where he received $500k as a prize money. Also, he earned a good winning amount from the show, Ex on the Beach.