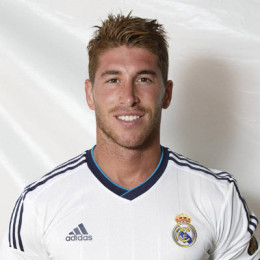 A Spanish professional football player Sergio Ramos who also plays for Spain national team and Real Madrid. He is regarded as one of the best Defender in the world and mainly plays as a center back and right back. He began his youth football career from the football club FC Camas. His older brother named Rene who now works as his agent encouraged him to play football and join his first club FC Camas.

Growing up in Seville where bullfighting was popular, like every kid Ramos also dreamt of being a Torero, but his dreams changed after his elder brother Tene introduced him to football.

Ramos first joined the local club FC Camas where his talent as a footballer was developed. During his spell in the club, he won many Man of the Match awards which caught the eye of the media.

Later when he turned 14, Ramos joined his hometown club Sevilla FC where he played in the youth campaign with Jesus Navas and Antonio Puerta. He got the chance to play in the first team in La Liga coming in for Francisco Gallardo in the 64th minute on February 1, 2004. His debut match was a 1-0 loss against Deportivo de La Coruna. He played 41 games in the 2004-05 season netting two goals. His first UEFA Cup goal against CD Nacional.

The following season Ramos transferred to Real Madrid for an impressive fee of €27 million a record fee for a Spanish defender. His first goal for the club came on December 6, 2005, against Merengue.

Initially, he played as a center back and occasionally as a defensive midfielder. After Madrid signed Pepe and Christoph Merzelder he played as a right back. His aggression on the pitch combined with his goal-scoring ability made him one of the most dangerous defenders of all time. Ramos also received many red cards for his aggressive play, receiving a total of four reds in his debut season.

In August 2015, Ramos extended his contract with Madrid signing a five-year deal. He was also appointed as captain after former captain Casillas transferred to FC Porto.

Sergio Ramos has represented his country in the U17, U19 and U21 division before making debut in the senior team at the age of 18 on March 26, 2005, against China. He was the youngest player to represent a country in the last 55 years until it was broken by Cesc Fabregas on March 1, 2006.

He was a regular in Spain's campaign in the Euro 2008. In a match against Germany which Spain won 1-0, Ramos wore a T-shirt in honor of his former Sevilla teammate Puerta who died in August 2007.

He captained Spain for the first time on June 3, 2010, in a friendly match against South Korea which ended in favor of the Spainyards. Ramos also represented Spain in the 2010 World Cup and helped his country win the title with five clean sheets.

Ramos was part of the Spain squad that won the Euro 2012. He earned his 150th cap for Spain on March 23, 2018, playing against Germany. In May 2018 he was included in Spain's 2018 FIFA World Cup squad. After Spain's group stage match against Morroco which ended 2-2, Ramos who captains the side said that his team is weak in the back and will try and improve in the coming games.

Sergio Ramos from his prolific career has earned an impressive net worth which is estimated around $62.2 million as of 2019. Besides his annual salary of $25 million playing for Madrid, he also makes a good sum from an endorsement deal with Nike. He gets around $8.5 million from endorsement. He wears Nike Tiempo Legend VII boot(priced around $230).

He resides in Madrid in a luxury home which he bought in 2015. The current value of the real estate is around $6.5 million.

Till now his name has been linked with many girls. But his relationship with them didn't last long, and they broke up.

After many failed relationships Ramos finally settled down with Pilar Rubio, a model, presenter, and a TV journalist. The pair met for the first time in 2012, and after they appeared in the FIFA Ballon d'Or, their relationship was confirmed. He proposed his girlfriend on 16 July 2018 and the couple got engaged.

He is an avid fan of bullfighting and is friends with matador Alejandro Talavante. Besides football, Ramos has a keen interest in horses. As a matter of fact, he owns a stud farm which focuses on breeding Andalusian horse. He also loves to play guitar in free time.

Ramos is a Catholic and has inked Mary on his left arm.

He is cute little gorgeous baby. His picture along with Ramos and Rubio can be found in different sites.

Marco is the second child of Ramos and Rubio born on 14 November 2015.

Alejandro is the youngest and third son of Ramos and Rubio born on 25 March 2018.