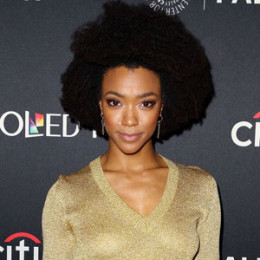 Sonequa Martin-Green is an American actress popularly known worldwide for her role as Michael Burnham and Sasha Williams in the series, "Star Trek: Discovery" and "The Walking Dead." She made news by being the first female lead in Star Trek history and is among our talented actresses. Martin-Green debuted in the entertainment industry in 2005 with a movie named "Not Quite Right" and, after her debut, was cast in many movies and Television series. Her renowned works also include some of her series like "New Girl," "Once Upon a Time," "Gossip Girl," "Army Wives," and so on.

Sonequa Martin-Green was born Sonequa Martin on March 21, 1985, in Russellville, Alabama, United States. She grew up with her four sisters, three of whom are her half-sisters. Growing up, she was determined to be a psychologist since she was interested in learning human behavior.

She was confident that she would become a psychologist and decided firmly in the tenth grade. But later on, at 16, she decided to pursue acting instead and even stated that it was very similar to her former planned job as a psychologist. 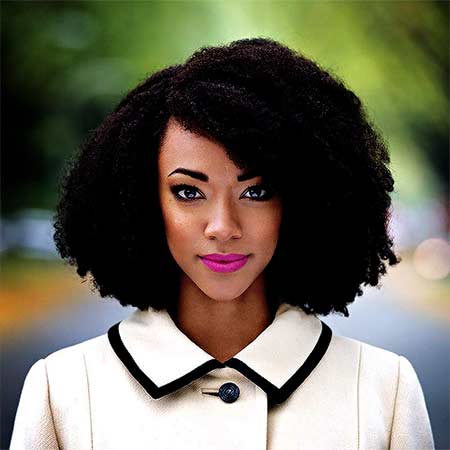 Later, to groom her acting skills, she joined the University of Alabama and graduated in 2007 with a theatre degree. Then she moved to New York, where she began her professional acting journey and met her husband, Kenric Green. After staying in New York for five years, the couple eventually moved to California and resided there.

Sonequa Martin-Green is a professional actress who debuted in the movie world in 2005 with a movie named Not Quite Right, where she portrayed Coco Delight. Later in 2008, she starred in an episode of Law & Order: Criminal Intent, which was her small-screen debut.

After her debut, Green got her breakthrough role in The Walking Dead, where she portrayed Sasha Williams for 44 episodes. Her role in the series grabbed everyone's attention, and soon, she was popular worldwide. 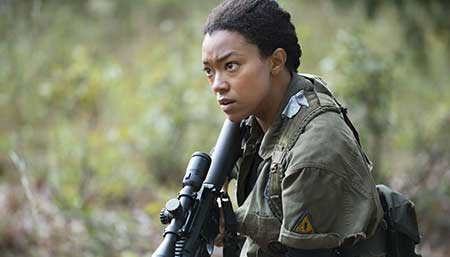 Her other series include Once Upon a time, Escape, New Girl, and Penn Zero: Part-Time Hero, which showed her acting skills and versatility. Some of the movies she was cast in after her debut was Rivers Wash Over Me, Yelling to the Sky, and Shockwave Darkside.

Martin-Green is an active cast of the CBS' popular series Star Trek: Discovery, where she plays the role of Lieutenant Commander Michael Burnham and has appeared in 15 episodes as a series lead.

She was even awarded the Saturn Award for Best Actress on Television for her Star Trek: Discovery role. Martin-Green created history by being the first female lead on Star Trek, a huge achievement. In the series, she is joined by actors like Doug Jones, Anthony Rapp, Mary Wiseman, and Wilson Cruz.

Sonequa Martin-Green is estimated to have a net worth of $2 million which she earned from her career as an actress.

Sonequa Martin-Green is married to her The Walking Dead co-star Kenric Green whom she met at the start of her career in New York, where they performed the play Fetch Clay and Make Man together.

They married in a private ceremony on December 4, 2010, and seemed deep in love. Green has good things to say about his wife and says working beside her has helped him generate his best acting delivery.

The very first time our son laughed out loud, at 2 months old, was because of you. So happy I captured it. (SWIPE) I think watching you play with your son is one of my favorite activities on this Earth. Like this game you two play often, where Kenric gets a kick out of you saying “You let me go, you put me down” when you’re the one holding him up in the air. The play is so perfect because I get to see, so clearly, your strength and gentleness at the same time. I get to see your beautiful, wide smile, I get to hear your delightful, infectious laughter. I get to see your love for our son shining in your eyes and dancing in your voice. I get to see his joy, him almost losing his breath he’s laughing so hard, fully present with you. It’s like it’s just the two of you in the world in these moments. I sit back and just watch. A blessed participant, a grateful witness. My heart burning and swelling, like it wants to incinerate or burst out of my chest. My what a father you are...my what a man you are. What a gift I have in you. What a life I have with you. I endeavor to deserve you, every day of my life. Happy Father’s Day my love.

The couple gave birth to their firstborn, Kenric Justin Green II, on January 10, 2015, in Los Angeles, California. During the shoot of the fifth season of the series, The Walking Dead that she got pregnant, and the costume crew hid her pregnancy by putting on a thick layering of clothes around her. She even carried big guns to cover her pregnant belly. Having a child has been the most joyous moment in her life, and she talks about how motherhood has made her become a responsible and loving person.

She initially had thought about changing her name from Sonequa to Sone during college, but when her teacher named, Seth Panitch, told her not to change it as it defined her, she dropped the idea forever. Both Matin-Green and her husband are vegans.

Martin-Green has been the ambassador for Stand Up to Cancer since April 2016 and has been aware of it since her mother is a three-time cancer survivor, and her sister has breast cancer. She has used her social media handles to raise awareness for cancer research and the importance of participating in clinical trials. Martin-Green is a brave citizen who presents her opinion straightforwardly and isn't afraid to support what she believes in.

She has spoken in favor of the Black Lives Matter movement and raised her voice against the discrimination and injustice that people of different gender and race have to suffer. Martin-Green talked about the Pulse nightclub shooting in Orlando and joined a charity event to support the Pulse Nightclub victims.

She appeared on the Good Morning Britain show to talk about the launch of her Star Trek: Discovery series. There she talked to Piers Morgan about gender fluidity, saying a daughter can also be named after her father, like her character in the series, since she is named Michael Burnham.

Morgan couldn't quite get what she meant exactly and made a fuss by commenting,

"I'm very confused about gender fluidity, people one day wake up thinking they are Sonequa and the other day think they are Michael. She calmly cleared his misunderstanding and said by that she meant the industry should give equal opportunities to all genders.

Here is a video of Sonequa Martin-Green talking about Star Trek on the Ellen Show on January 12, 2018.

The couple first met while shooting a movie and fell in love. They married on December 4, 2018, and has a beautiful son together.