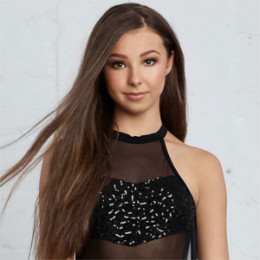 Sophia Lucia, American teenage dancer known after her in her participation in reality dance show, Dance Moms. She also participated in reality shows including Dancing with Stars, America's Got Talent, and Shake it Up. With her amazing talent and skill, she became successful to list her name in the Guinness World Record.

Sophia Lucia was born on 7th September 2002, in California under the birth sign Virgo. She is American as per her nationality and is of mixed race. She is the daughter of Jakie Lucia. She has an older brother, Vinny Lucia.

Lucia never attended school as was homeschooled from the get-go. From the very early age of two, she learned dancing at San Diego Dance Centre in Poway, California. She started competing at the age of three.

Sophia Lucia started her dancing career in 2013. She participated the third season of Dance Moms with her mother. She competed with other dancers like Maddie Zieler, Chloe Lukasiak, and Nia Frazier in the show.

In the same year, Lucia won the title of Favorite Dancer 17 & Under at the Industry Dance Awards. She was also listed in the Guinness Book of World Records for the most consecutive Pirouettes with a total of.

In 2014, Lucia won the title of Junior Female Best Dancer at the Dance Award. Along with this, she also appeared in some of the highest ratings shows like Dancing with the Stars, America’s Got Talent, The X Factor and Shake It Up. Her stardom took her to the Ellen Degeneres show where she was praised a lot.

Sophia Lucia, age 15, is currently linked with her dance partner named, Jack Beckham. The chemistry between them seems mesmerizing. They posted many pictures together with the caption,

‘’ Wishing this talented, smart, funny, annoying guy the happiest of birthdays!! @wmjack_beckham I'm so proud of you! This time last year we were in Varna getting ready for Don Q, and today you're probably at the studio working hard as usual! I can't wait to come see one of your shows at @tulsaballet and I'm so honored to have been apart of your journey! You are the best partner I've ever had and hope we get to dance together again! I love and miss you so much and I'm bummed I can't be there to hug you today! Love Soph.’’

They might be in a relationship, however, the fact has not been confirmed yet. She might be single in the present days, she has kept her personal life low profile.

Sophia has maintained an impressive net worth in her life. She might have an estimated net worth not less than million comparing the net worth of her fellow dancer, Maddie Ziegler.

Sophia has been the Ambassador Spokes Model for Capezio since 2014. She won first prize in the YouTube series, Teen Dance Challenge. She has won Junior Female Best Dancer at The Dance Awards.

Apart from this, Lucia also has her own YouTube channel under her own name with thousands of views and subscribers. She earns $180-$2.9k yearly from the channel. She might increase her net worth in future with more hard work and dedication.