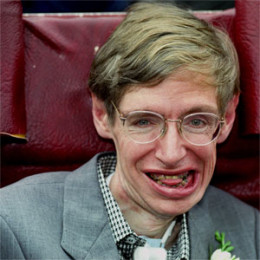 World Renowned Scientist Stephen Hawking was famous for his groundbreaking and revolutionary discoveries of relativity and black holes. He was a British scientist and author who wrote almost 15 books. He was also a Director of Research at the Center for Theoretical Cosmology within the University of Cambridge. In 1970, he discovered the second law of black hole dynamics. For his works, he was awarded various awards and honors including Pride of Britain Awards, BBVA Foundation Frontiers of Knowledge Awards and the Presidential Medal of Freedom among others.At the age of 21, Hawking was diagnosed with Amyotrophic Lateral Sclerosis (ALS). The disease helped him became the noted scientist. Hawking was married twice. He firstly, married to Jane Hawking with whom he shared three children. He left Jane Hawking for a nurse named Elaine Mason.

At the age of 21, Hawking was diagnosed with Amyotrophic Lateral Sclerosis (ALS). The disease helped him became the noted scientist. Hawking was married twice. He firstly, married to Jane Hawking with whom he shared three children. He left Jane Hawking for a nurse named Elaine Mason and they got married as well.

Stephen Hawking was born Stephen William Hawking on 8th January 1942 in Oxford the United Kingdom under the birth sign Capricorn. Hawking was British by nationality and as far as his ethnicity was concerned, he was Caucasian.

Hawking’s mother, Isobel Hawking (1915-2013) was a Scottish whereas, his father, Frank Hawking (1905-1986) was the head of the division of parasitology at National Institute for Medical Research. He had two sisters, Philippa & Mary and an adopted brother, Edward.

In 1950, Hawking along with his family moved to St Albans, Hertfordshire where the family was considered eccentric (unique) and intelligent.

At the young age, Hawking used to enjoy board games with his friends. He along with his friends also manufactured their own fireworks, model airplanes, and boats. They often did long discussion about extrasensory perception and Christianity.

In 1958, Hawking along with his friends started to build a computer from scrape clock parts, an old telephone switchboard and other recycled components with the help of Dikran Tahta, a mathematics teacher. Hawking paid no attention in bookish studies rather spent much of the time in innovative techniques so, was considered as 'Einstein' at his school.

By the time, Hawking developed his interest in mathematics, he decided to attend the Oxford University but his father wanted him to join medicine but he applied for a scholarship and on October 1959, he joined the university after receiving a scholarship.

After the graduation, Hawking joined the University of Cambridge for a Ph. D. in cosmology. During his early days in the university, he shows some abnormal physical symptoms.

He was then diagnosed with motor neuron disease. According to the doctors, he was in his early stage of Amyotrophic Lateral Sclerosis and had only two years to live.

Stephen Hawking, at the initial phase of his career, became the member of Institute of Astronomy on Cambridge. Hawking discovered the second law of black hole dynamics in 1970 and later proposed the four laws of black hole mechanism along with Brandon Carter and James M. Bardeen.

In 1973, he along with Borisovich Zel’dovich and Alexis Starobinsky came up with Hawking Radiation. He gained much of the popularity from his works and was also awarded by various honors and awards.

In 1977, Hawking was appointed as a professor with a chair in gravitational physics. Despite his disease, the University of Cambridge appointed him as the Lucasian Professor of Mathematics. In the university, he along with Gary Gibbons organized a Nuffield Workshop, The Very Early Universe which mainly focused on the cosmological inflation theory.

Hawking gained international popularity after he published a book, A Brief History of Time in 1988. He retired from the post of Lucasian Professor and became the director of research at the Department of Applied Mathematics and Theoretical Physics in 2009.

In 2011, Hawking participated in a trail of iBrain, a new headband-styled device. The device helped to read the mind of the wearer through the ‘waves of electrical brain signals.’

In July 2015, during a news conference in London, Hawking launched a project, Breakthrough Listen (a program used to search the intelligent extraterrestrial communications in the Universe) funded by Yuri Milner, the Russian entrepreneur.

Hawking discovered his own equation of the black hole. His research work on the Universe and Black Holes gained him a wide range of recognition in the scientific world. In 2007 he experienced space travel and weightlessness.

He gained an opportunity to experience environment without gravity while visiting Kenney Space Center in Florida.

Besides that, he also made a guest appearance on The Simpsons, Star Trek: The Next Generation and Late Night with Conan O’Brien. In 2012, he appeared on The Big Bang Theory.

Stephen Hawking received several honors and awards. In 1974, he was elected as a fellow of the Royal Society (FRS). Some of his awards include:

Some of his other honors are the Wolf Prize, named a Companion Honor by Her Highness, the Copley Medal, the Presidential Medal of Freedom, Julius Edgar Lilienfeld Prize, and the Russian Fundamental Physics Prize among others.

Stephen Hawking had an estimated net worth of $20 million. Hawking was considered as a bestselling author. He earned much from his books:

2. Black Holes and Baby Universes and Other Essays (1993)

5. God Created the Integers: The Mathematical Breakthroughs That Changed History (2005)

6. The Dreams That Stuff Is Made of: The Most Astounding Papers of Quantum Physics and How They Shook the Scientific World (2011)

Some of his co-authored books include

2. The Large, the Small and the Human Mind (with Roger Penrose, Abner Shimony, and Nancy Cartwright) (1997)

Hawking also earned a good amount from his co-authored books with his daughter, Lucy:

Hawking owned The Stephen Hawking Foundation which is established for the public benefit.

In 2014, a film, The Theory of Everything was released which was based on his bio. The movie collected $123.7 million at the box office which was made with the budget of $15 million.

Stephen Hawking was diagnosed with Amyotrophic Lateral Sclerosis (ALS) at the age of 21. The disease is generally called motor neuron disease which causes the death of neurons controlling voluntary muscles. As per the doctors, he had only two years to live.

While Hawking was at Oxford, he began to notice his physical problems like he would fall or slur his speech. Until 1963, he seemed to have no such problems. Even after facing several symptoms, he kept it only to himself. But after his father noticed it, he directly took to see a doctor.

For several weeks, Hawking was admitted and underwent several tests. After being released from the hospital, he built a big dream which he was going to execute. He passed a statement regarding his dream,

‘’ Before my condition was diagnosed, I had been very bored with life. There had not seemed to be anything worth doing.’’

By 1969, Hawking lost his control over his body and was forced to use a wheelchair. During that time, he needed assistance for everything except feeding and getting out of the bed. In 1985, he lost his voice.

Hawking with the help of a speech program, Equalizer by a California-based company, World-Plus allowed him to select words on the computer screen which passed through a speech synthesizer. During the time, he had to use his fingers to select the words via handheld clicker. But as time passes, he controlled it via cheek muscle which was attached to a sensor.

In 2009, Hawking’s health became the major concerned after he missed the conference in Arizona because of his chest infection.

The couple shared three children, Robert, Lucy and Timothy Hawking. In 1990, he left Jane after having an affair with a nurse, Elaine Mason. The couple tied the knot in 1995. The couple had no children together. The nurses who were looking after Hawking claimed that his wife was abusing him physically which he strictly denied.

In 2006, Hawking and Mason divorced for some unrevealed reasons. After the divorce, he became close with his first wife, his children, and grandchildren.

On 14th March 2018, Stephen Hawking died at the age of 76 in Cambridge, England. His family revealed the news of his death to the world. They did not reveal the cause of death but stated that he ‘’died peacefully early in the morning.’’

After his death, his children made a statement public,

"We are deeply saddened that our beloved father passed away today."

Many other scientists also tweeted a heartfelt message regarding the sad demise of Stephen.

Below, in the video Stephen talks about his life:

Some of his famous quotes include:

• ‘’Intelligence is the ability to adapt to change.’’
• ‘’The greatest enemy of knowledge is not ignorance, it is the illusion of knowledge.’’
• ‘’I have noticed even people who claim everything is predestined, and that we can do nothing to change it, look before they cross the road.’’
• ‘’We are just an advanced breed of monkeys on a minor planet of a very average star. But we can understand the Universe. That makes us something very special.’’
• ‘’My goal is simple. It is a complete understanding of the universe, why it is as it is and why it exists at all.’’
• ‘’Life would be tragic if it weren't funny.’’
• ‘’I have no idea. People who boast about their IQ are losers.’’
• ‘’People won't have time for you if you are always angry or complaining.’’
• ‘’We only have to look at ourselves to see how intelligent life might develop into something we wouldn’t want to meet.’’
• ‘’Not only does God play dice, but... he sometimes throws them where they cannot be seen.’’

On 14th July 1965, Stephen Hawking got married to Jane Hawking. The couple met before Hawking was diagnosed with the disease. In 1995, the couple divorced.

Soon after the first debut, Stephen Hawking married his nurse, Elaine Mason on 16th September 1965. Elaine Mason was the reason behind his first divorce.

Robert Hawking is teh first child born to Stephen Hawking and Jane Hawking in May 1967.

Stephen Hawking and Jane Hawking welcomed their second child, Lucy Hawking on 2nd November 1970. Lucy co-authored several books with his father. She is married and has a child, William Smith.