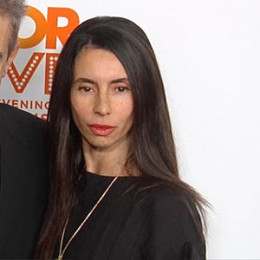 We have heard many non-celebrities came to limelight only because of their spouse or partner. Among those Tharita Cesaroni is one who rose to fame after she started a relationship with her star husband, Dermot Mulroney. Her husband is one of the best actors in Hollywood with whom she shares two adorable daughters.

Tharita Cesaroi is living a blissful married life with boyfriend turned life partner Dermot Mulroney. She lives a low profile life even after being hitched to a famed celebrity.

Tharita Cesaroni is married to her boyfriend turned husband, Dermot Mulroney in 2008. She is also referred to as Prima Mulroney (Tharita Cesaroni Prima). Their wedding was held in a private ceremony attended by families and friends. They are bound in a marital relationship for twelve years now.

More recently, Tharita enjoyed newfound fame in the United States. She can often be seen next to her spouse at public events including 2018 Vanity Fair Oscar Party in Beverly Hills, California.  Cesaroni is a mysterious and camera-shy person thus she optionally appears on her beau's social media.

Some months after the marriage, the couple welcomed two daughters. They gave birth to their first child, Mable Ray Mulroney in April 2008 and second daughter, Sally June in 2009. 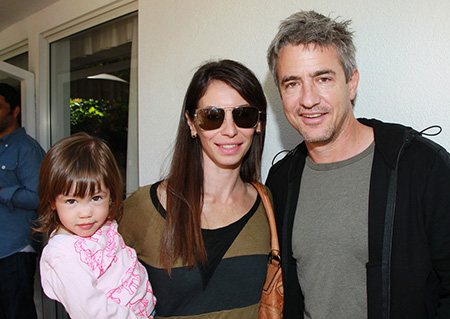 Their two children completed the Mulroney family. Moreover, it's been years since the couple is together without any divorce rumors.

Before marrying Tharita, her spouse previously married his first wife Catherine Kenner, an actress in 1990. The couple met on the sets of Survival Quest and eventually started dating. Months after dating, they finally tied the knot.

Moreover, the former couple shares a child, a son Clyde Mulroney together. But due to some issues, the couple decided to get a divorce which finalized on 19th December 2007. As per the rumor, Dermot started an affair with Tharita which became the reason for their divorce.

Tharita Cesaroni's net worth is yet to reveal so, as of now, her net worth is unclear. Though as per some sources, a cinematographer makes an average salary that ranges from $5k to $30k per week.

Regarding the earning of her husband, he has an accumulated net worth of $11 million which he makes from his acting career.

Besides, in 2018, the actor bought a house in Hancock Park for $2.065 million. The 2075 sq ft house featured 3 bedrooms and 2 bathrooms. He also owns a house in Santa Monica worth $2.5 million. Furthermore, the husband-wife couple is also involved in several charity works.

Tharita Cesaroni was born in 1973 in Milan, Italy. According to her nationality, Cesaroni is Italian and belongs to Caucasian ethnicity. Her parents France Catulle and Emi Cesaroni raised her in Italy.

Moreover, her father, France is from Calabria whereas mother from Italy. Her mother is an Italian singer and actress.

By profession, Tharita is a cinematography agent. She is famous for being the wife of a famous actor Dermot Mulroney.

Her husband is undoubtedly one of the best actors in Hollywood. He worked in numbers of movies and TV series.

Tharita Cesaroni and her husband Dermot Mulroney are in a martial relationship since 2008. They are a parent of two children, two daughters.

Tharita Cesaroni and Dermot Mulroney's first child, Mabel Ray Mulroney was born in 2008, the day when they got married.

Tharita Cesaroni and Dermot Mulroney shares two daughters. Among two, Sally Mulroney is the youngest who was born in 2009.