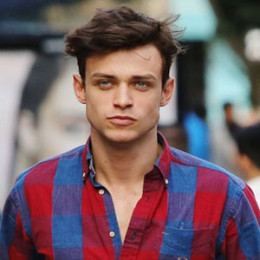 Thomas Doherty is a British actor popular for his role in Descendants 2 as well as Disney television musical series The Lodge. He is a young actor who gained recognition in such a short period of time. Doherty is currently dating his co-star Dove Cameron. It's not been long that the duo started dating but looks like they are deeply in love with each other.

Thomas Doherty was born on April 21. 1995 in Edinburgh, Scotland. He grew up with his sister Rachel Doherty, a dancer and older brother Niall Doherty, a soccer player.

Doherty completed his education from The MGA Academy of Performing Arts. He had a keen interest in soccer while growing up.

Thomas began his career working as a model. He also worked at a restaurant while modeling. He entered the film industry in 2013 performing as a street boy#2 in Dracula, a horror drama.

Doherty landed the starring role in Disney television musical series The Lodge alongside Sophie Simnett. His fame rose to the prominence level when he starred in Descendants 2 as Harry Hook. He also performed in a short film The First Time in 2016.

Thomas is a new face in the film industry. Thus he has played in few movies and TV series. However, he managed to achieve success in such a short span of his involvement in the acting field.

In his acting journey, he got the opportunity to work with young stars such as Sofia Carson, Cameron Boyce, China Anne McClain, Mitchell Hope and many others.

The handsome actor Doherty is in a romantic relationship with Dove Cameron. Dove is an actress plus singer by profession. The duo first met on the sets of Descendants 2 and eventually fell in love with each other. They made their relationship official in 2016.

The love birds share a strong bond and are deeply in love. According to the source, Thomas gave a customized bracelet of a heart shape pendant to his love Cameron. He nicknamed his girlfriend, Chlo and was written in the bracelet as well.

The 22-year-old earns a decent amount from his career. His estimated net worth is $1 million.