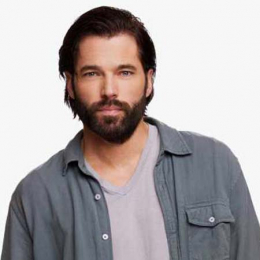 Canadian actor, Tim Rozon is a famous actor who is known for his hunky personality and acting skills around the Canadian film industry. He is known for portraying the role of Tommy Quincy on the CTV teen drama Instant Star. He is also known for working in films and television series like Wynonna Earp, Pur, End of the Line and many more.

He won the prestigious Gemini Award for his role in Flashpoint and he was nominated for Canadian Screen Awards for his roles in Befriend and Betray.

Tim Rozon is happily married to her girlfriend turned wife Linzey Rozon. The pair shared the wedding vows on 6 September 2015 following their couple of years dating life. Further, the wedding was held in a private ceremony and the duo tied the knot in between their close friends and family.

Rozon knows how to separate his personal life from professional life and shares very little about his wife. Besides, by digging in his spouse's Instagram account, they are seen together in a postback from 2012.

The 42-year-old actor is a handsome hunk and is mostly loved for his personality and it is hard to believe that, the star is questioned and rumored for his sexuality. The actor, however, gave the answer to questioning being gay by marrying a gorgeous bride.

Time was firstly rumored for dating his co-star Alexz Jackson from his movie Instant Star. It was found later that, it was just a rumor as both denied dating and nobody found any connection between the pair.

After that, the actor was rumored for dating his fellow co-star Chantel Riley. The couple used to share a very good bond outside of the reel life and often used to wish one another on their special occasions.

Through that strong bond, it was found that they were just good friends and nothing more than that. Here we can see the Twitter post which Tim shared in his Twitter,

Rozon is currently out of any media controversies and is happily living with the love of his life. He is private about his personal life but shares his many experiences in the media about his professional life. Additionally, he is an active person on social media and often shares posts regarding his daily life.

Where is Tim Rozon Now?

Tim Rozon, the CBS comedy Schitt's Creek cast is enjoying his blissful married relationship with his Linzey Rozon. The 43-year-old and his sweetheart most recently celebrated their fourth wedding anniversary on 6 September 2019.

They have been united as life partners for nearly five years today. Regardless of being together for years, the pair aren't yet blessed with children. Rozon is an avid pet lover, he is mostly seen with a Siberian Husky (dog).

Tim shares amazing with Linzey and never lags behind showing his affection to his lover. Till today's date, neither of the pair is involved in extramarital affairs and divorce rumors. The Rozon couple resides in Montreal where they've found a restaurant Garde Manger with Chuck Hughes.

How much is the Net Worth of Tim Rozon? Know about his Salary, Earnings

Rozon started his acting career in the film industry by debuting in the 2004 Canadian film named Pure with the role named Sam. Since then, he appeared in many films like Duo, End of the Line, Long Gone Day and many more. Besides, he also worked with a voice role in the animated Canadian film named The Legend of Sarila in 2013 which was made with a budget of $8.5 million.

After that, he caught the eyes of many producers and starred in hit television series like See Jane Date, Naked Josh, Fries With That, 19-2, Saving Hope and many more. Until now, he worked with acting sensations like Toby Stephens, Mira Sorvino, Paul Rudd, and Martin Donovan.

My heroes have always been Cowboys. @alexbergerphotography #nashville #cowboy #tennessee

Apart from Tim's acting career, he is an owner of two restaurants named BLe Garde Manger and Le Bremner which are held in Montreal. Similarly, he also produced the documentary feature Shuckers, about the world of oysters and those who sank them.

Tim Rozon is currently married to the Linzey Rozon. The duo shares a solid bond and is together for over five years.