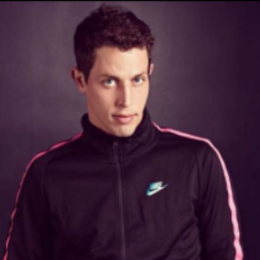 Tony Hinchcliffe is an American comedian and actor best known for writing staff on the Comedy Roast Series. He portrayed the roaster on the All Def Digital Roast of Snoop Dogg that was broadcasted on Fusion. Hinchcliffe appeared in several TV shows, including One Shot and Killed Tony.

Actor Tony Hinchcliffe is happily married to his beloved wife Charlotte Jane. For the past few years, fans have been eager to know about the Kill Tony cast's relationship details. But, Hinchcliffe who prefers to keep his private details away from the media spotlight had been pretty upfront about his relationship with Jane. 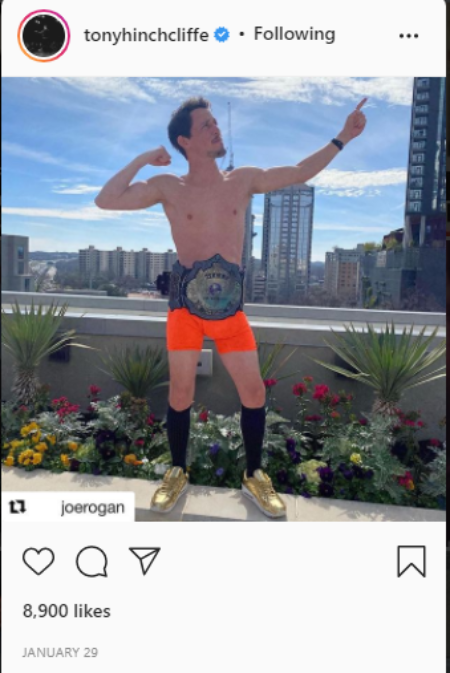 Well, Hinchcliffe first announced he was engaged to the daughter of Bob Jane who is a race driver from Australia in 2017 before they married in November 2017. 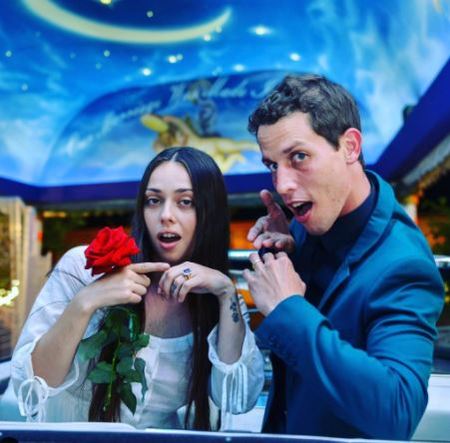 Although fans thought he was mostly joking about his engagement, his Honeymoon post later proved that the two were infact in a relationship and had been married too. Tony and Charlotte don't share any kids yet.

What is Tony Hinchcliffe's Net Worth?

Tony Hinchcliffe has summoned a whopping net worth of $5 million as of 2021. Hinchcliffe earned big bucks from decade long career as an actor, television personality, and writer.

Likewise, Tony wrote scripts for the Comedy Central Roasts Justin Bieber, Rob Lowe, and James Franco. Hinchcliffe has worked for the comedy panel show The Burn with Jeff Ross and participated in season one of Jeff Ross Presents Roast Battle. 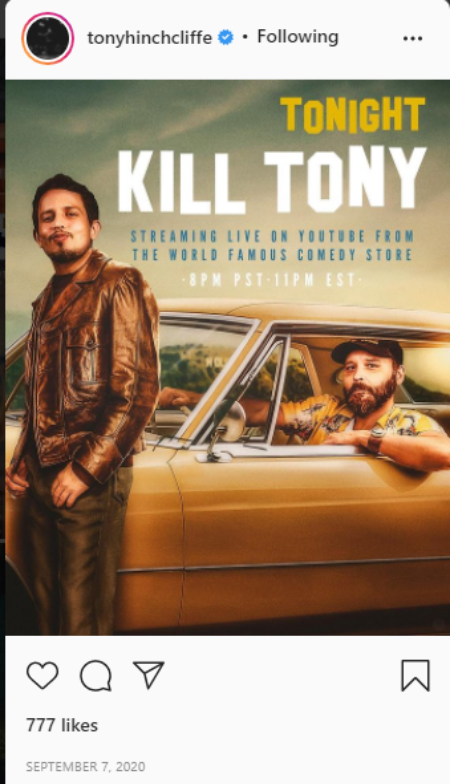 Tony Hinchcliffe is famous for his appearance in Kill Tony. SOURCE: Instagram

Hinchcliffe also hosted and produced a podcast or weekly live show Kill Tony, recorded at The Comedy Store. At the same time, Tony and co-host Brian Redban acted as judges in front of amateur comedians.

In 2016, Tony portrayed Roaster on the Roast of Snoop Dogg, which was broadcast on Fusion network. At the end of the same year, he launched a podcast, The Pony Hour.

Hinchcliffe lashed out at the audience, who cheered at Dang's jokes, referring to them as "race traitors." Later on, the video displayed on Twitter resulted in a massive backlash against Hinchcliffe. Followed by controversy, agency WME suspended Tony from two shows.

During an interview with Dan, Vulture reported Hinchcliffe addressed that Chinese people moved to Austin because of the bats. In addition, he critically offended audiences for believing he was serious. Dang, on the other hand, claimed Hinchcliffe never apologized to him.

Meanwhile, despite the backlashes, Hinchcliffe still continues to perform as a comedian and does show. In March, Hinchcliffe announced he was in action to perform for his Tony Hinchcliffe & His Current Friends show. Many of his even left comments on Instagram that they were purchasing tickets and were excited to see him for some laughs.